Something of Value (Africa Ablaze)1957 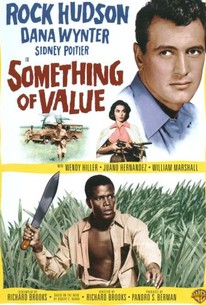 Something of Value (Africa Ablaze) Photos

The literalism of writer-director Richard Brooks serves him well in this meticulously faithful adaptation of the Robert Ruark novel Something of Value. Filmed on location in Africa, this is the story of the Mau Mau uprising in Kenya, as seen through the eyes of a handful of protagonists. Virtually alone in a sea of racist British colonialism, gentleman farmer Peter McKenzie (Rock Hudson) strives to understand the demands of freedom and equality made by Kenya's black population in particular and his childhood friend Kimani (Sidney Poitier) in particular. Ultimately, however, McKenzie and Kimani find themselves on opposite sides of the fence when the latter aligns himself with the Mau Mau. Without advocating the terrorism of this controversial movement, the screenplay is careful to deal the ongoing iniquities and frustrations that forced men like Kimani to take arms against their white brethren. There were a few theatres in the American south who, feeling that the racial tensions inherent in Something of Value hit too close to home, refused to book this fascinating, thought-provoking, often startlingly brutal film.

Ike Jones
as Askari
View All

Critic Reviews for Something of Value (Africa Ablaze)

Brooks' chief insight -- good and bad on both sides, tolerance the answer -- hardly seizes the imagination, and the contentious climax, with Hudson carrying a wounded Poitier on his back, has every indication of being intended symbolically.

A pretty, good estimation of the social problems involved.

The picture lacks a feeling for the larger issues at stake, but on its own melodramatic terms it is absorbing and even enlightening.

Adapted from the Robert Ruark novel, this overlong drama about Africa's Mau Mau troubles tries to deal fairly with both sides but never reaches any illuminating conclusions.

Though the story is fiction, the film rings true, with a fair portrait of both sides of the conflict.

As drama not much in value.

Audience Reviews for Something of Value (Africa Ablaze)

There are no featured audience reviews yet. Click the link below to see what others say about Something of Value (Africa Ablaze)!

Something of Value (Africa Ablaze) Quotes