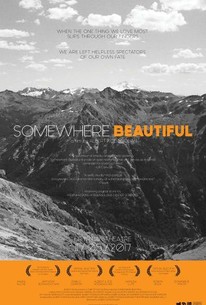 SOMEWHERE BEAUTIFUL, shot with exceptional detail on 16mm and 35mm film in the Patagonian wilds of Argentina and the idyllic sun soaked locale which is Los Angeles, is an intimate and restless tale of abandonment and acceptance. One of the standouts from the DGA Directors Finder Screening Series, SOMEWHERE BEAUTIFUL stars the French film legend Dominique Pinon, rising Italian-American starlet Matilda Anna Ingrid Lutz and stunning performances from Argentinian actors Pablo Cedron and Maria Alche as well as Robyn Buck. In a metatextual homage to Atom Egoyan's seminal Calendar (1993), Kodagolian films the first portion in South America, where the story revolves around a love triangle and a photographer's doomed relationship. Back in Los Angeles, Kodagolian finds himself filming what will soon become a tragic, alternate universe of his own fiction: looking after his two-year old daughter in the slow motion collapse of his own marriage. Interlacing his present life and his past views on love and partnership with the fictional tale set in Argentina, Kodagolian has created an effortlessly hypnotic ode to Patagonia as the timeless backdrop to an examination of the vulnerability of relationships and the reality-bending impact of the creative process.

A conceptual exercise about the parallels between a director's life and his work that's as pretentious as it is turgid.

It is, rather, a harsh reminder of the reality that relationships can drift apart and people can move on, no matter how beautiful the dream of togetherness may seem.

Unsurprisingly, it is the Patagonian strand that makes Somewhere Beautiful worth watching.

In its search for a unifying metaphor, Somewhere Beautiful drifts between a travelogue and a show-reel, an experiment which never quite moves beyond the picturesque.

There are no featured reviews for Somewhere Beautiful at this time.