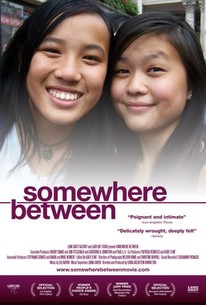 In profiling Chinese adoptees in contemporary America, Linda Goldstein Knowlton's deeply moving documentary illustrates that even the most specific of experiences can be universally relatable. Of the roughly 80,000 girls who have been adopted from China since 1989-a decade after China implemented its One Child Policy-the film intimately follows four teenagers: Haley, Jenna, Ann, and Fang. These four wise-beyond-their-years, yet typical American teens, reveal a heartbreaking sense of self-awareness as they attempt to answer the uniquely human question, "Who am I?" They meet and bond with other adoptees, some journey back to China to reconnect with the culture, and some reach out to the orphaned girls left behind. In their own ways, all attempt to make sense of their complex identities. Issues of belonging, race, and gender are brought to life through these articulate subjects, who approach life with honesty and open hearts. -- (C) Official Site

News & Interviews for Somewhere Between

View All Somewhere Between News

Critic Reviews for Somewhere Between

There's not much interpersonal drama here, and the little that materializes gets promptly resolved.

Watching this movie, I feel the need to run to the mall or someplace, and find a Chinese baby to hug. Or, at least, I can hug my own daughters.

In this poignant movie we meet four Chinese-born teenagers who are living with American parents from Berkeley to Boston.

These girls - and Ruby - have traveled far, on a journey not yet finished; you sense, though, that they know their way home.

An enlightening documentary about four girls adopted in China by American parents who as teenagers are struggling with their identity and whether to learn more about their birth families.

A deeply moving film that raises profound questions about the merits of international adoption.

Adoption docu is heartwarming and emotional.

The film shows the girls as reassuringly normal, which is good for their psyches but not particularly exciting to movie audiences.

It finally boils down to people who care about other people, and it's enough to restore your faith in humanity.

Intimate and compelling. All four of the teens' stories and experiences featured are enlightening.

Audience Reviews for Somewhere Between

Dedicated to her own adopted Chinese daughter, Linda Goldstein Knowlton has created a raw and intimate love-letter carrying the message that the journeys and identities of each adopted child are unique, and sharing their stories gives new perspectives of what may or may not be important in the examination of our selves. Haley, Jenna, Ann, and Fang are incredibly strong young women, and America is so fortunate to be in their graces.