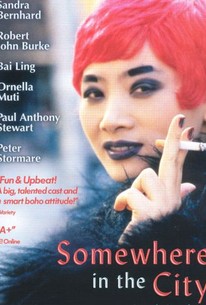 Iranian-born director Ramin Niami loosely adapted the Maxim Gorky play The Lower Depths for this ensemble character study set in modern-day New York City's Lower East Side. Sandra Bernhard stars as Betty, a remarkably introverted and lonely therapist hungering for a male companion. In her apartment building, several other residents also have emotional, career, or romantic issues. Chinese student Lu Lu (Bai Ling) wants to stay in the U.S., so she interviews prospective husbands in hopes of obtaining a green card. Marta (Ornella Muti) is forced to sexually service her building's fat landlord daily in exchange for a free room, but she's in love with Frankie (Robert John Burke), an inept thief. Che (Paul Anthony Stewart) is a rich kid trying to incite a worker's revolt from his basement headquarters, while Graham (Peter Stormare) is a gay Shakespearean actor looking for love. Their stories intersect in the film's finale, which involves the kidnapping of former New York mayor Ed Koch (who plays himself).

Ed Koch
as Himself
View All

Critic Reviews for Somewhere in the City

There are no critic reviews yet for Somewhere in the City. Keep checking Rotten Tomatoes for updates!

There are no featured reviews for Somewhere in the City at this time.

Somewhere in the City Quotes