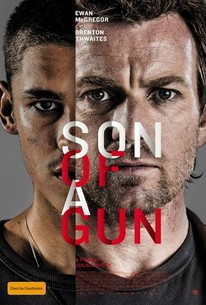 Critics Consensus: Gritty, stylish, and smart, Son of a Gun serves up plenty of genre thrills while offering a refreshing change of pace for Ewan McGregor.

Critics Consensus: Gritty, stylish, and smart, Son of a Gun serves up plenty of genre thrills while offering a refreshing change of pace for Ewan McGregor.

Critic Consensus: Gritty, stylish, and smart, Son of a Gun serves up plenty of genre thrills while offering a refreshing change of pace for Ewan McGregor.

Son of a Gun Photos

When JR (Brenton Thwaites) is sent to prison for a minor crime, he becomes the apprentice to Brendan Lynch (Ewan McGregor), Australia's public enemy number one. When JR helps Brendan break out, they go on the run and form a complex co-dependent relationship. JR quickly learns in the criminal world, life is like a game of chess. To gain control, you have to stay a few moves ahead of your opponent. Lose that control, and you risk becoming a pawn in their very dangerous game. (C) A24

News & Interviews for Son of a Gun

View All Son of a Gun News

Critic Reviews for Son of a Gun

Vikander has barely a wisp of fictional personality to exploit. Still, the action is skilfully staged, there is a rough fug to the cinematography, and the double crosses are cunningly finessed.

A not-so-thrilling heist thriller that drones along mechanically between explosions and car crashes with Ewan McGregor, who is making entirely too many movies these days, none of them worth writing home about.

Unlikely discussions about the differences between chimps and bonobos provide sub-Tarantino laughs, and the heist is handled with stripped-down B-movie efficiency.

From here, the film begins its rapid slide into absurdity, invoking every action movie cliché imaginable.

Son of a Gun is an entertaining heist thriller starring Ewan McGregor that takes the well-trodden territory of the prison break and the criminal afterlife and sets it in the gold mines, beach resorts and skanky motels of Australia.

McGregor, who is having a bit of comeback moment right now, is kind of great as the ruthless antihero, and the action set pieces have plenty of fizz.

Filmmaker Julius Avery delivers an exceedingly erratic narrative that's at its best in a surprisingly captivating first half...

Nearly every narrative twist and character tic feels lifted from another film, so much so that one would readily believe this to be a direct remake of something.

The one saving grace is that although hilariously clichéd, Son of a Gun is also an entertaining and visceral thriller - though not always on purpose.

Simply a story of love and friendship. Both intertwined, both powerful. [Full review in Spanish]

It's not a setup we haven't seen before, yet Son of a Gun trots along at an effective pace, resulting in what is simply a good old-fashioned crime drama.

Son of a Gun may be another gritty Australian crime offering, but it is also an enthusiastic, expressive and engrossing example of its genre.

Audience Reviews for Son of a Gun

While the directing and acting works on pretty much all levels, the plot of this jail / gangster / heist thriller is a little high on coincidence and pretends to end on a twist that's not particularly surprising. Still, the action scenes are well done and you want to know how it all ends. An entertaining film whose Australian setting gives it a distinctive look...

Not what I would call a great movie, but it's definitely a good one, at the very least. It's not the most unique film in existence, since it did remind me of the most recent movie I saw like this, Escobar: Paradise Lost, except in Paradise, the main character falling in love with Pablo Escobar's niece was actually welcomed by the drug kingpin. When JR falls in love with his boss' eye candy, as it were, since that is the only reason she's there and to spy on JR and his intentions, then he gets into trouble because of that. And, of course, I'm not saying everything in both films are exactly alike, but they share some similarities, like JR in this film becoming increasingly more involved in criminal activities as the danger keeps ramping up as the story progresses. Like I said earlier, there's nothing about this film that's completely unique to it, it feels like an amalgamation of several different stories you've already seen. I know that might read as an insult, but it's not, since I do think that this flick is well-written and the acting is strong. Ewan McGregor is always great. Brenton Thwaites however, I don't know what to make of this guy. I mean he was good, but he was lacking in something. I don't know, he just didn't have the presence to be a leading man, particularly in this type of role. He just seems, to me, more suited to films that tend to appeal more to young adults, like The Giver, a film based on a YA novel. He's got a good look if he leaves his long hair intact. If he cuts it, it just makes him look like he's 15-year-old despite, currently, being 26. So that makes it a little difficult to buy into him as a hero in this type of setting. And I'm not saying that he was even bad, cause he was good. But I just feel that he was missing a little something when it comes to a commanding screen presence. Thankfully McGregor is there to pick up the slack as it relates to intensity and dominating every scene he's in. It's definitely an against type role for McGregor but he does really damn well at it, which doesn't surprise me considering how talented the guy is. I will say, however, that the film does lose a little steam once Brendan and JR go on the run. It is what it is, but I do admit that that held the film back, at least a bit, for me. I can't call this great, or even really good, at all, but it is a more than solid film that benefits from strong acting and a solid little story. It definitely has its flaws here and there, but, by and large, this is an enjoyable genre film. It's on Amazon Prime, so if you're subscribed to it, then you should give this a shot.

Well made and nicely shot if a little ordinary, Son Of A Gun comes alive whenever the deeply charismatic Ewan McGregor or luminous Alicia Vikander take centre stage.

Definitely one of the better films from Ewan Mcgregor of late. What initially may look like a low rate Australian heist drama turns out to be gripping and edgy and keeps you watching until the end.

Son of a Gun Quotes