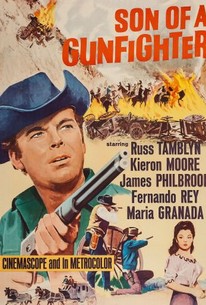 Son of a Gunfighter Photos

In this western set during 1877 along the Mexican-American border, outlaws attack a stagecoach and find themselves defeated by an ace gunman with a hatred for evil-doers. The gunman decides to take off after the group leader, but the good guy shootist is hit while defending a beleaguered rancher from Mexican banditos. Later the rancher's daughter and the gunman fall in love. The gunslinger and a bounty hunter take off after the outlaw. Unfortunately, when push comes to shove, the outlaw refuses to fight without the gunman because he cannot bear to kill his own son. This does not stop the gunman's partner from taking a shot; the outlaw is wounded, causing his son to rally to his aid, and the gunslinger rides back to keep the banditos from stealing the ranch. They are finally stopped but not before the bandito leader and the outlaw fatally shoot each other. Afterwards, the gunman gives up shooting and begins leading a pacifistic life with his new bride. ~ Sandra Brennan, Rovi

Critic Reviews for Son of a Gunfighter

There are no critic reviews yet for Son of a Gunfighter. Keep checking Rotten Tomatoes for updates!

Audience Reviews for Son of a Gunfighter

There are no featured audience reviews yet. Click the link below to see what others say about Son of a Gunfighter!

Son of a Gunfighter Quotes