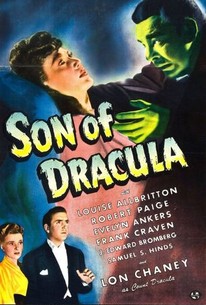 Son of Dracula represents a felicitious creative collaboration between director Robert Siodmak and his screenwriter-brother Curt. The story is set in the American south, where the mysterious Count Alucard (Lon Chaney Jr.) has recently taken up residence. Katherine Caldwell (Louise Allbritton), a student of the occult, is fascinated by Alucard, so much so that she agrees to become his wife. But when Katherine begins to look and act strangely, her former suitor Frank Stanley (Robert Paige) suspects that something's amiss. Assisted by town doctor Brewster (Frank Craven) and psychologist Laszlo (J. Edward Bromberg), Frank comes to the inescapable conclusion that Count Alucard is actually the dreaded vampire Count Dracula's offspring (this much he might have figured out simply by spelling the man's name backward!) To prevent Dracula from spreading his influence throughout America, Frank and his confreres race against time to destroy the count and, hopefully, rescue poor Katherine.

Walter Sande
as The Jailor

Cyril Delevanti
as The Coroner

News & Interviews for Son of Dracula

View All Son of Dracula News

Critic Reviews for Son of Dracula

It's a good entry of its type.

Despite all the accepted props, from the lonely Southern plantation set in a miasmic bog to the squeaking bats and creaking coffins, this thriller is a pretty pallid offering.

The script is far from wonderful, and offers Siodmak little to get his teeth into, notwithstanding a beautifully atmospheric first entry for the Count (Chaney and coffin rising from the misty depths of a lake) and an effective finale.

A tedious tale with perhaps the worst performance ever in a film by Lon Chaney, Jr. A fencepost has more charisma than Chaney as Count Alucard. Painfully slow and awkward.

Chaney is the least magnetic actor to don the Universal cape and fangs, though Siodmak rolls with it and surveys the studio's vampiristic paraphernalia with humorous verve

While it is quite silly and suffers from one of the worst casting decisions in the 33 year history of the classic Universal horror, Son of Dracula is actually halfway decent.

Done in by a weak script.

Aside from the big hole named Chaney in the middle of the film, this is one of the most interesting ... entries in Universal's long-running series of monster movies.

All you have to do is get past the clumsiness of Lon Chaney, Jr., in the lead role, and you're off to enjoying one more of Universal's dependably enjoyable monsterfests.

They should have stopped at #2

The supporting cast, the direction and the musical score help, but Chaney is a serious stumbling block.

A sequel with some bite to it.

Audience Reviews for Son of Dracula

I don't remember if anyone in this movie was actually the son of Dracula (from the first movie with Bela Lugosi), but this movie is entertaining and I enjoyed it.

Lon Chaney plays Dracula just because he's Lon Chaney in this film about Count Dracula's quest for real estate in the USA. Chaney plays Count Alucard (yes, spell it backwards) who ends up hooking up with a '40's version of a goth chick. Hilarity ensues when she becomes one of the undead because she wants to spend eternity with her true love. Yes, the film and the plot are as stupid as they sound.

Very nice story. The horror aspects of it are played down, even for a classic of its time, but the story is so intriguing with a great payoff that it's well a worth a watch.

Lon Chaney, Jr's performance as Dracula doesn't hold a candle to either Bela Legosi, who played the original Dracula, or to Chaney's father, the great "Man of a 1000 Faces", Lon Chaney. This film -- to me anyway -- brought the series to a screaming halt. Not atmospheric or scary or anything except boring. The only thing to recommend it is some nice bat-to-human transformation scenes. It's obviously hand-drawn animation, but it still looks pretty good.