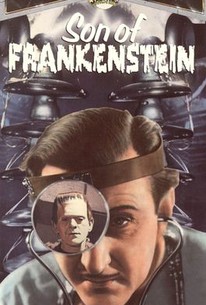 Critics Consensus: Boris Karloff's final appearance as the Monster is a fitting farewell before the series descended into self-parody.

Critics Consensus: Boris Karloff's final appearance as the Monster is a fitting farewell before the series descended into self-parody.

Critic Consensus: Boris Karloff's final appearance as the Monster is a fitting farewell before the series descended into self-parody.

The most elaborate--and longest--of Universal's Frankenstein series, Son of Frankenstein represents Boris Karloff's last appearance in the role of the Monster. The title character is played by Basil Rathbone, who with wife Josephine Hutchinson and son Donnie Donegan returns to the Old Country to take over his late father's estate. Rathbone receives a cool reception from the local villagers, who remember all too well the havoc wreaked by his father's monstrous creation. Though he assures his neighbors that he has no intention of following in his father's footsteps, Rathbone is hounded by suspicious town constable Lionel Atwill, whose stiff artificial arm is an unfortunate legacy of an earlier confrontation with Karloff. Also hanging around Frankenstein Castle is crazed shepherd Bela Lugosi), whose neck was broken in an unsuccessful hanging attempt. Lugosi wishes to exact revenge on the city fathers who'd tried to execute him, and to that end persuades Rathbone to revive the hideous Karloff. At first resistant, Rathbone becomes as obsessed as his father with the notion of creating artificial life. Now the fun begins, directed with Germanic intensity by Rowland V. Lee. Though Mel Brooks's Young Frankenstein has rendered Son of Frankenstein virtually impossible to take seriously, the film remains an excellent marriage of the slick, sanitized production values of the "New Universal" and the Gothic zeitgeist of the earlier Frankenstein epics. Best line: Lugosi, looking over the dormant body of The Monster, explains raspily that "He does...things...for me." Hans J. Salter's intense musical score for Son of Frankenstein would continue to resurface in Universal's Mummy B pictures of the 1940s. Watch for Ward Bond in a bit part as a police officer...and see if you can spot Dwight Frye, whose supporting part was excised from the final release print, among the villagers.

Boris Karloff
as The Monster

Ward Bond
as Gendarme at Gate

Critic Reviews for Son of Frankenstein

Amusingly entertaining with some "chilly" moments.

If the story has any value, it contains a rather unnecessary warning to medical men not to carry scientific curiosity too far. None of this detracts, however, from the quality of the acting.

Altogether a workmanlike essay in synthetic horror, and Mr. Rathbone enters with relish into the spirit of it.

[Bela Lugosi] pretty much steals the movie in his last really juicy role.

Works as a healthy reminder of how superb horror can be, balancing tragedy and humour and making me yearn for a return to using strong actors and plot to give the genre the respect it really deserves.

The Son of Frankenstein is, in short, a missed opportunity for all save the most unsophisticated.

The job of welding fantasy and everyday into one whole falls mainly upon Basil Rathbone, as Frankenstein; and he does it magnificently. No lesser actor could have succeeded.

Guaranteed to scare you.

Universal has a worthy successor in this to the first "Frankenstein" picture, for, though less horrific, it is as exciting as the other.

Producer-Director Rowland V. Lee decided that moviegoers... might like a new dish of horror. He has surpassed himself in filling the bill.

Audience Reviews for Son of Frankenstein

Repeating the sins of the father is an overriding theme in â~Son of Frankensteinâ(TM) and the film doesnâ(TM)t tread lightly around it. Trying to tame and domesticate the inherently feral and wild is a futile enterprise as Wolf Frankenstein (Basil Rathbone) unearths in this rousing, unexpectedly character-driven sequel that doesnâ(TM)t bastardize the films that came before it. Karloff is still an inimitable silent actor since he must gesture and flail to convey the monsterâ(TM)s self-hatred. For example, when the monster is awoken, he stares into the mirror and acts predatory until the tragic revelation that he is looking at his own reflection. However, the film is plundered outright by Bela Lugosiâ(TM)s scenery-chewing as Ygor, Frankensteinâ(TM)s deformed assistant. Lugosi is insidiously creepy and manipulative by using Wolfâ(TM)s scientific curiosity to his revenge agenda. The townspeopleâ(TM)s sudden change-of-heart in the third act is a lazy deus ex machine but otherwise this is a judicious, absorbing rebound for the Universal monster.

In spite of great casting, without James Whale at the helm the overall result is campy and less artful. Not a horrible film but not in the same league as Whale's Frankenstein or Bride of Frankenstein.

This movie has a fantastic cast, an interesting story, and a classic monster, but it could have been a better movie. Still, I enjoyed it mostly.

I saw this once. It is so Amazin to watch the mid 30 Horror Movies with Boris Karloff.