Son of Fury: The Story of Benjamin Blake1942 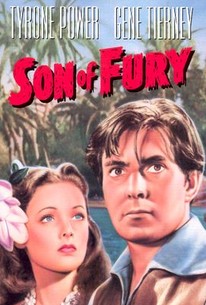 Son of Fury: The Story of Benjamin Blake Photos

This period swashbuckler film is based on the adventure novel Benjamin Blake by Edison Marshall, who also wrote The Vikings (1958). When his brother dies, scheming Arthur Blake (George Sanders) kidnaps his own nephew, Benjamin (played as a youth by Roddy McDowall and as an adult by Tyrone Power). Arthur's purpose is to claim his brother's dukedom for himself. Put to work as a stable boy, Benjamin grows up and develops a crush on his own cousin Isabel (Frances Farmer). When Arthur discovers this, he mercilessly beats Benjamin, who runs away and sails to India on a cargo ship to make his fortune. In Polynesia, he and a friend, Caleb (John Carradine), jump ship and set up camp on a tropical island paradise. There, Benjamin and Caleb become rich mining pearls, while Benjamin falls in love with a native girl, Eve (Gene Tierney). Now that he has amassed wealth, however, Benjamin is determined to return to England and get his revenge on Uncle Arthur. ~ Karl Williams, Rovi

Roddy McDowall
as Benjamin as a Boy

Marilyn Knowlden
as Isabel as a Girl

Critic Reviews for Son of Fury: The Story of Benjamin Blake

Elsa Lanchester's performance is notable and has given us much pleasure all night. [Full Review in Spanish]

Audience Reviews for Son of Fury: The Story of Benjamin Blake

Tyrone Power was 26 and Gene Tierney was 20 when this paean to young love was filmed, one of the few times the Hollywood formula of emphasizing the love story was actually spot on the money. So there's the main plotline about a young Englishman denied his rightful due because of injustice (finely delivered by George Sanders as one of his best bad guys) and seeking redress, and that's okay, but the story hits its stride when he lands on this island paradise. John Carradine surprises as, wait for it, the best buddy (I've NEVER seen him play it, and he's quite good)! And there's Tierney in a sarong, wriggling some native dance (and she's quite good!). I'd never heard of this one before, and you should look for it a a decent adventure tale. Did I get around to mentioning Frances Farmer yet?

Son of Fury: The Story of Benjamin Blake Quotes