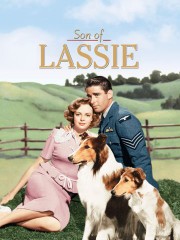 Find son of lassie Lady afraid of guns and not jumping over fens but crawl under it.

The plan gets shot down and Lady with owner.

The air raid sequence looked impressive with all the explosions and destruction.

The landscapes or mountains and snow of Norway looked amazing.


Nazis use Grande on log cabin so it will not be used to hide allies.


Have Lady encounter POW camp where a blind man ask to use Lady for a Seen Eye dog.

Workers are around digging and putting sand bags for barricades

Dog can't even fetch a stick.

Lady came home with owner. Nothing about the ending came as a surprise because it was expected. The body of the film and journey was the best part of the film.

Ben C
July 15, 2015
A simple 'Lassie-esqued' film that tugs at the heart strings well and focuses on devil-may-care though unaware and friendly Laddie very well as the movie is set during the Second World War.

John B
½ January 2, 2015
Nice Lassie story during the WWII and the heroism the son of Lassie (Laddie) goes through to save his master.

Anthony P
½ March 6, 2011
Great movie and great story line. June Lockart had a very small role in here but great in the tv shows of Lassie

Jason J
December 20, 2009
Lassie's son Laddie and his master Joe are shot down over Norway during WW2 and have to hide from the Nazis. Another great Lassie movie.

Ruby D
November 27, 2008
I believe that I have probably seen all the Lassie movies ever put out. Lassie movies are by far my most favorite movie. It is a clean, safe movie for family, friends and children.

Catherine T
½ July 7, 2008
A bit cheesy... not as good as "Lassie Come Home," but sequels rarely are. And I'm afraid that Canada stood in for Norway... I'm sure I recognized those mountains! But the scenery was nice, fake or not, and my word, Peter Lawford was a handsome man!

Jason J
May 31, 2008
Lassie's son Laddie and his master Joe are shot down over Norway during WW2 and have to hide from the Nazis. Another great Lassie movie.

James H
November 13, 2007
I am not a huge fan of Lassie movies, but the good production values boost this one up a few notches. The World War II slant on the film is an interesting twist. Good cast, Donald Crisp is very good. Of course Lassie is amazing as always.