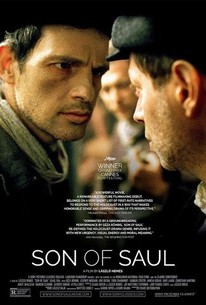 In this searing drama, a concentration camp inmate tasked with burning the dead discovers the body of his young son, and must choose between participating in the clandestine uprising being planned among the prisoners, or securing a proper Jewish burial for his child.

Jerzy Walczak
as Rabbi in the Sonderkommando

Critic Reviews for Son of Saul

Son of Saul is a film of considerable virtuosity, a harrowing film like no other before it.

Son of Saul employs the formal mechanics of filmmaking to turn [its] ... questions back in on and around themselves, doing what cinema does best in the hands of great filmmakers: showing by not showing, telling by not telling.

Perhaps one of the most striking works of art about the Holocaust yet made.

Son of Saul is a masterwork that leads viewers right to the gates of hell.

Important as it is essential, the movie is a remarkable achievement deserving of every honor and ounce of acclaim it has so far achieved, watching it a catastrophically profound experience I'm not soon to forget.

It's an extraordinary method of making this unfathomable act personal, a formalist experiment that yields stunning emotional dividends.

If the intention is to give us even a fleeting experience of what it could have been like to live in constant fear, hoping for a breath of humanity in a life shaped by evil, then it has achieved that entirely.

I understand Godard's criticism of Schindler's List now. No holocaust movie should be a thriller. Hungarian first timer Laszlo Nemes's Auschwitz set drama is at once riveting and quietly devastating experience and it doesn't feel like a gimmick.

Son of Saul presents a gargantuan moral victory in the face of incomprehensible evil.

Its jagged stylistic urgency [makes] it unlike any prior Holocaust drama

Nemes also achieves a cinema separated from sentimentality that offers a sober, unavoidable and gloomy glimpse of dehumanization in times of war. [Full review in Spanish]

László Nemes believes in the viewer's capabilities and gives him an intelligent, hard and real film. [Full Review in Spanish]

Audience Reviews for Son of Saul

A good portrayal of the Holocaust only let down by the lead actor, who shows no emotions at all, even after discovering the dead body of his son.

Even though it is a true lesson in technique and direction, it deserved to have a more interesting protagonist with better motivations. Full review on filmotrope. com

Given the theme, Son of Saul is understandably difficult to watch. In many ways it should be. The plot doesn't follow the traditional narrative that highlights an improbable hero. Its hyper-realistic style addresses the murder directly head on with no relief to alleviate the terror. The brutal efficiency with which the Nazis oversee this evil task is a robotic death camp of mind numbing savagery. A seemingly unending hell on earth from which human life is disposed like a mechanized chore. Even watching prisoners scrub the human blood from the floor of an massive shower can be an overwhelming experience. Son of Saul is largely a compelling drama. Where the chronicle doesn't near a masterpiece lies in the conclusion. The fact that Saul and his fellow workers' days are numbered will inspire questions as the story wears on. Why submit to a ghastly task that only prolongs your inevitable death by days? Some abatement from their chamber of horrors is suggested but Saul's behavior becomes vexing for viewer. Setting up a brilliant beginning also demands a skillful ending. Son of Saul doesn't quite deliver at the same level all the way through, but it is still a very powerful film nonetheless. fastfilmreviews.com

SCREAMS AND WHISPERS - My Review of SON OF SAUL (5 Stars) Staggering and unforgettable, SON OF SAUL takes a subject many feel has been played out and sees it through the fresh eyes of a first-time filmmaker with a burning passion to tell a story. What director László Nemes, his co-writer, Clara Royer, cinematographer Mátyás Erdély, and their star, Géza Röhrig, have done is provide an entirely visceral, emotionally credible experience devoid of maudlin speechifying and shameless pandering. Premiering in competition (unheard of for a first-time director) at the 2015 Cannes Film Festival and winning 4 awards, SON OF SAUL marks the arrival of a stunning new voice in cinema. Röhrig, as Saul, is the epitome of the Walking Dead. A Hungarian Jew working the death factories at Aushwitz, Saul, like so many of the Sonderkommando, is forced to bring his fellow prisoners into the gas chambers, steal their valuables for his captors, and dispose of the dead's ashes or bodies. In a lesser film, Saul would have corny moments where he would talk about the injustice of it all. Here, in the hands of a clear master, Saul hardly ever speaks. He just does...relentlessly. His soul, what's left of it, shines through in Röhrig's eyes. While on detail, he notices a dead young boy and claims it is his own. This may or may not be true, but in this hellscape, Saul makes it his mission to give this boy a proper burial. He finds a purpose in a world seemingly without it. In doing so, Saul comes alive. It's a deceptively simple story, but what makes SON OF SAUL unique is how it's presented. The camera stays tight on Saul for most of the film. While either in front of or behind our main character, everything else appears in shallow focus. The horrors of the camp happen just offscreen or we're given quick glimpses. There are times where you have to work a little to figure out what's happening. It's completely intentional, since Saul doesn't seem to understand it all either. With very little dialogue, he bounces from task to task, narrowly surviving some close calls. Prisoners and guards alike speak to each other with a dehumanizing intensity. Corpses are referred to as pieces, and clearly as a survival tactic, Jews speak to each other with a complete lack of empathy. It's survival of the fittest, and anyone else is dead weight. One critic has referred to this film as HOLOCAUST: THE VIDEO GAME, an insulting comparison I'll agree with only in the sense that SON OF SAUL has impact, intensity, and profound forward motion. Additionally, the sound design, credited to Tamás Zányi , with sound editing by Tamás Székely, puts most blockbusters to shame. This is an intuitive, frightening, credible use of sound to truly put the viewer in this situation. Without a score, we hear different languages, screams, whispers, factory noises, and sometimes a hideous silence, all of which add up to a complete world. We may never know what it was actually like for those who suffered at the hands of the Nazis, but SON OF SAUL rings the truest for me. This is a prime example of the symbiotic relationship between a director, cinematographer and star, all of whom seem to be in perfect sync with each other. It's claustrophobic and numbing, and why shouldn't it be? While Saul traverses the camp looking for a Rabbi and tools to complete his mission, an uprising plot springs forth from Saul's fellow prisoners. Many may find this element of the film to be underwritten and tough to decipher. I'm among them, especially during a visit to a women's unit. The filmmakers definitely don't like to spoon-feed their audience. Ultimately, it doesn't matter. What occurs becomes pretty clear by the end, and you're left with a stunning final act which blends sentimentality with its polar opposite in an almost wordless, heartbreaking yet life-affirming fashion. Nemes could have so easily given us the Tom Joad, "I'll Be There" speech, but instead he allows so much to be said with this convergence of violence, hopelessness, and one of the wryest smiles in cinema history. You won't soon forget SON OF SAUL, nor should you.