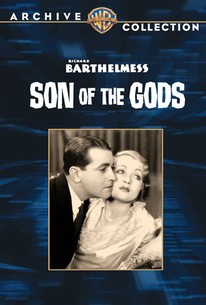 In this drama, a young man grows up believing that his is Chinese. Later he falls in love with a Caucasian girl and encounters his first taste of racial prejudice until he discovers that he too is Caucasian. Happiness ensues.

Critic Reviews for Son of the Gods

There are no critic reviews yet for Son of the Gods. Keep checking Rotten Tomatoes for updates!

Audience Reviews for Son of the Gods

Oh, what a cringe-inducing moment it is, to see Constance Bennett's face contort in shock and anger when she discovers her new lover (Richard Barthelmess) is "Chinese", and then goes and strikes him repeatedly in public. There is some solace in her being suitably apologetic afterwards, getting chastised, and then still loving him, but the film's real triumph is in treating Asian-Americans with dignity, and showing the hypocrisy of white people. How fantastic is it when early on he says "They are liars and hypocrites. Their religion teaches love and brotherhood and equality, but they worship money and prejudice!" Now you may be thinking as I did, Richard Barthelmess is Asian? And this is one of the film's weaknesses, as is E. Alyn Warren (another Caucasian) playing his father. You'll have to bear with that part, and forgive the film for not putting Asian actors in primary roles, though in Barthelmess's case, it is eventually explained. If you can do that, you may find it refreshing that the characters (including the servants) speak eloquently, and have a sense of class in the face of the racism of others. It's far from perfect, but its heart is in the right place, respecting the culture, and pointing out one's character is more important than one's race ("love knows no barriers"). Another great quote, practically reading the mind of the viewer 88 years later, is when he questions "Why should I be glad..." to be Caucasian, and not Asian. Now, how it resolves itself takes away from a little of the message, but what a difference this one is from others from the time which were hyping 'yellow peril'. It is a little creaky in places, with slow and stilted dialogue, but Bennett livens things up a bit with her playful presence and defiance of her father. "Take me in your arms, and dance with me," she implores Barthelmess, and then later "Kiss me, and don't talk." It's an average film and certainly not going to blow you away, but I bumped it up a bit for the step it took in the racial dialogue, even if it can't be judged by today's standards.

Son of the Gods Quotes