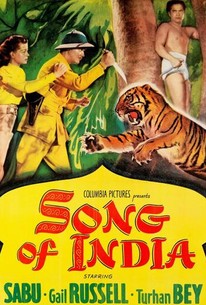 In this adventure set in the dark jungles of India, a young Indian prince occupies himself by providing zoos with wild animals. He finds himself in deep trouble when he decides to enter a sacred jungle and do some hunting. According to local legend, the natural peace between man and beast will be broken if a killing should occur because for every animal that is slaughtered, a human will be slaughtered in turn. When the arrogant prince and his lover hear the legend they scoff and callously continue their hunt. Fortunately, the captured critters are assisted by a clever jungle boy who releases them. He then takes the woman hostage, leading to a knife fight between the boy and the prince. Just as it looks like the wicked prince will prevail, a wounded tiger pounces and saves the jungle boy. Meanwhile the startled prince is seen tumbling down a steep mountainside.

Critic Reviews for Song of India

There are no featured reviews for Song of India at this time.