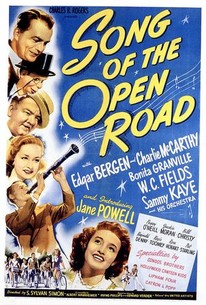 A beautiful child (14-year-old Jane Powell in her feature film debut) star tires of life in the spotlight and so disguises herself and sneaks off to join a Civilian Conservation Corps camp to work with normal kids. It doesn't take her long to discover that being "normal" isn't easy as it looks. When a crop is in danger of being ruined because there are not enough people to harvest it, the girl employs some of her famous colleagues to lend a hand. Cameo appearances include W.C. Fields, Charley McCarthy and Edgar Bergen and the dancing Condos Brothers. Songs include: "Too Much in Love," "Here It Is Monday," "Delightfully Dangerous," "Hawaiian War Chant" and "Notre Dame."

W.C. Fields
as Himself

Pat Starling
as Herself

Dummy: Charlie McCarthy
as Himself

Sammy Kaye and His Orchestra
View All

Critic Reviews for Song of the Open Road

[Jane Powell's] voice is exceptionally well-trained, her delivery excellent, and she has histrionic ability.

Although the story is rather thin, it should please most audiences, for it has both popular and classical music, the adolescent players are appealing, and there is considerable comedy as well as youthful romance.

The film has... originality and a very pleasant freshness. [Full review in Spanish]

There are no featured reviews for Song of the Open Road at this time.

Song of the Open Road Quotes