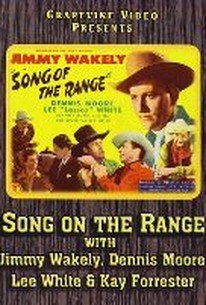 Starring Monogram's low-budget answer to Gene Autry, the rather colorless Jimmy Wakely, this minor music Western was actually disapproved for export on the grounds that it depicted what the censorship boards deemed "general lawlessness." The "lawlessness" depicted centers around Denny (Dennis Moore), impersonating a federal agent after being falsely accused of killing Bruce Carter (Hugh Prosser), a guest at the Mesa Inn. As it turns out, the dead man isn't what he claimed to be, either, but with the help of Jimmy Wakely, grizzled sidekick Lasses (Lee "Lasses" White), and girl agent Dale Harding (Cay Forrester), Denny clears up the general confusion within the allotted 56 minutes or so. While Moore attempts to clear himself of the murder charge, Wakely croons his own "Too Bad, Little Girl, Too Bad," "Good Morning Mr. Sunshine," and two or three other selections, while Lee "Lasses" White performs "When the Sunset Bids the Desert Goodbye" and an aggregation calling themselves the Sunshine Girls take care of the traditional "Red River Valley" at the hotel's swimming pool. Johnny Bond & His River Valley Boys also join the fun.

Critic Reviews for Song of the Range

There are no critic reviews yet for Song of the Range. Keep checking Rotten Tomatoes for updates!

There are no featured reviews for Song of the Range at this time.

Song of the Range Quotes