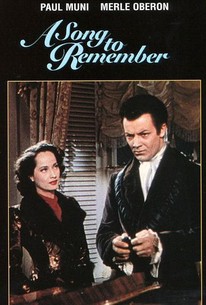 A Song to Remember Photos

One of the most successful filmed biographies of the 1940s, A Song to Remember alleges to be the true story of Polish composer Frederick Chopin. Actually, it has about as much relation to truth as a Heckle and Jeckle cartoon, but with such gorgeous creatures as Cornel Wilde and Merle Oberon in the leads, who cared? Though Wilde, as Chopin, is the nominal lead, top billing goes to Paul Muni, hamming his way through the role of Chopin's mentor Professor Joseph Elsner. Reportedly, Muni developed his characterization long before shooting started, refusing to allow the performances of the other actors to alter his interpretation in the slightest. This may explain why Muni seems to be acting in a vacuum, frequently completely out of rhythm with the film and its characters. Otherwise, Cornel Wilde does a nice job as the tempestuous Chopin, whose patriotic fervency frequently takes priority over his music. Merle Oberon plays novelist George Sand, who despite her preference for male clothing proves to be "all woman" during her torrid, decade-long affair with Chopin. The film's money scene--the one that everyone talked about, keeping the picture "alive" long after its original release--occurs towards the end, when the tubercular Chopin begins hemorrhaging as he performs his Polonaise for the first time (Jose Iturbi is heard on the soundtrack, "doubling" for Wilde's ivory-tickling). Sumptuously photographed in Technicolor by Tony Gaudio and Allen M. Davey, A Song to Remember was the usually penurious Columbia Pictures' top production of 1945. Fifteen years later, the studio hoped to make lightning strike twice with its Franz Liszt biopic Song Without End, but the magic just wasn't there.

Norma Drury
as Duchess of Orleans

Eugene Borden
as Duc of Orleans
View All

Critic Reviews for A Song to Remember

The music is fine, but the story is not.

The melodrama is pretty forced, but the music is superb.

Indefensible as either art or history, Charles Vidor's Chopin biopic is the absolute textbook definition of kitsch.

Audience Reviews for A Song to Remember

Muni made an art out of trying to play everyone. In some cases he pulls it off. In this case he does a disservice to Chopin's mentor and ultimately Chopin himself with a tepid performance.

A nice biography movie about Chopin. I enjoyed it, the actors are good and the story is interesting (weather or not it's accurate, I don't know).

A Song to Remember Quotes