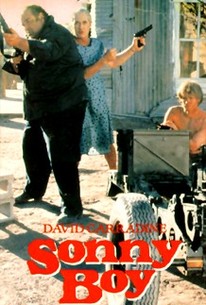 The story contained in this bizarre psychological drama/horror movie adds a new dimension to the term "dysfunctional family." It is set in a small town in New Mexico and is told through the eyes of "Sonny Boy," a horribly abused child who was raised by the brutal giant Slue, who rules Harmony with an iron fist and makes his money stealing and fencing televisions. Slue's "wife" and fellow gang member is the cross-dresser Pearl. They get Sonny Boy after their fellow gang-mate Weasel botches a car theft and kills the owners. He brings the car back and that's when they find the baby, whom Slue would have fed to the hogs had not Pearl begged him to let him raise the child. The kid might have been better off dead, for Slue constantly tortures the boy and even sets him afire one day. When not "toughening the boy up," Slue keeps him in a water tower and only feeds him live chickens to give him a craving for fresh blood. Seventeen years pass in this way. One day, Slue gets angry with the town mayor, loads Sonny in an ice cream truck and takes him to visit the town leader. Sonny Boy rushes in and bites the hapless mayor in the neck. From then on, Slue uses the poor teen to terrorize the town. One day, he leaves the boy briefly in a bar where Sonny meets seductive Sandy and is attracted to her. Had Slue not cut out his tongue, to keep Sonny from telling secrets to the police, he would have talked to the girl. Later Slue goes off on a business trip and Weasel and another take Sonny Boy out to kill a prospector for his gold. This is the final straw and the townsfolk finally retaliate. Sonny Boy survives the ensuing massacre and for the first time in his life is given a chance for normalcy and maybe even happiness.

Ivan Naranjo
as Sam
View All

Its lurid set-up should definitely interest cineastes who can appreciate a bit of tastelessness in their exploitation films, but Robert Martin Carroll's provocative directorial debut devolves into a surreal fairy tale with an undernourished finale.

There are no featured audience reviews yet. Click the link below to see what others say about Sonny Boy!