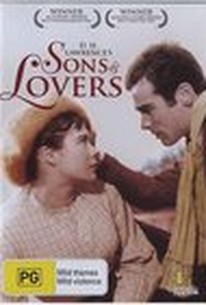 The Motion Picture Production Code was still in effect (albeit weakly) when Sons and Lovers was filmed in 1960, so don't expect a thoroughly frank and faithful adaptation of the D.H. Lawrence novel. Set in an English mining town, the film focuses on Paul Morel (Dean Stockwell), the sensitive son of a roughhewn, alcoholic miner (Trevor Howard) and his gentle, repressed wife (Wendy Hiller). Intent on becoming an artist, Paul is not above depending upon the financial kindnesses of the young women of the town. Many of the girls carry a torch for him, but his strong bonds to his mother leave him emotionally sapped. Freddie Francis's evocative, grimy industrial-town cinematography won him an Academy Award. Despite censorial restrictions, this admirably captures the essence of the dour Lawrence original. ~ Hal Erickson, Rovi

Critic Reviews for Sons and Lovers

The best one can promise those who like the book is that they will probably not be greatly disturbed by the adaptation and will see some elements capably dramatized.

Sons and Lovers is a well-made and conscientious adaptation of D. H. Lawrence's famed novel, smoothly directed by Jack Cardiff and superbly acted by a notable cast.

A slack and superficial adaptation of Lawrence's novel.

Somehow, this plainly euphemistic attitude toward Lawrence's fierce and fine account runs through the whole handsome picture and hobbles its real potential punch.

D.H. Lawrence has always proved a tricky test for filmmakers, but this is certainly one fo the better translations, thanks in no small part to the cinematography.

It is a curiously aimless, unfocused film which will excite neither the art nor the commercial audience.

The film's period details are excellent, and the direction by cinematographer-turned-director Cardiff is first rate.

An attractive, thoughtful adaptation of a difficult novel. Lawrence's sexual politics may have dated badly, but the cinematography and acting still exude quality.

Audience Reviews for Sons and Lovers

Victorian morality is pitted against teenage sexual urges in a small mining town. D.H. Lawrence's concentration on the decay of old sexual mores is on full display here, but unfortunately the depth of his characters is not. Miriam, as the film presents her, is thoroughly naive and uninteresting, and her third act scenes seem inconsistent considering all that has come before. I also thought the Oedipal relationship between Paul and Gertrude could have been more developed. We don't need to be pounded over the head with it, but the connection between Paul's sexuality and his devotion to his mother could have been more obvious. With no small contribution from the fantastic performance by young Dean Stockwell, Paul is the only character who is fleshed out and developed. In Stockwell's hands, Paul is what he is in the book, a man who is out of place and ahead of his time but confined by the morality of his place and time. Some of the scenes between Clara and Paul would have fallen flat in the hands of a lesser actor, but with Stockwell, never has a game of cribbage been so smoldering. Operating within the standards of the time, Sons and Lovers does its best to convey sexuality without the tired Risky Business trains-through-tunnels metaphor, but for once I found myself hoping for voice overs that could feature some of Lawrence's original language, so rich in feeling and sound. Overall, this version of Sons and Lovers is quite good, but if only we were able to transport the 1960 version of Dean Stockwell into today's time, I think we would have a better, immortalized look at Lawrence's masterpiece.

Strong performances all around elevate this hard drama of crushed and stalled hopes. Not a surprise that this received many awards including several Oscar noms, the excellent cinematography won. A fine film from an era when cinema was about the human condition.

It was ok. The acting was surprisingly realistic and there was not a bad performance to be found. However, I didn't find the plot very interesting and I found the movie to be a bit boring.