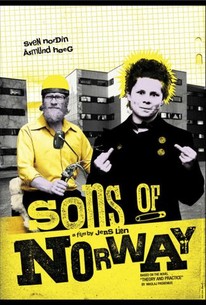 A young Norwegian boy transforms into a rebellious punk rocker following a sudden tragedy that leaves his once-happy family irreparably fractured. The year is 1978. 14 year old Nikolas (Åsmund Høeg) is the oldest son of an eccentric family that also includes his passionate, architect father Magnus (Sven Nordin) and his loving mother Lone (Sonja Richter). Political rebels who revel in shaking things up, Magnus and Lone encourage independent thought in their two young boys, but when Lone is killed in a senseless hit and run, her husband can summon the strength to get out of bed and sends Nikolas' younger brother to live with his more conventional aunt and uncle. Meanwhile, young Nikolas is left searching for his own identity, and quickly grows enamored with the anarchic growl of singer Johnny Rotten and the Sex Pistols. Before long the young boy has acquired some hair dye and a fistful of safety pins, and completed his transformation into a true punk rocker. Later, Magnus begins to emerge from his depressive haze, and much to Nikolas' surprise, shows great support for his son's newfound image rather than chastising him for it. Eventually, Nikolas decides to get creative, and starts a band with his best friend and another pair of local punks. When drugs and girls enter the picture, however, things quickly start to spin out of control. ~ Jason Buchanan, Rovi

John Lydon
as Himself

Critic Reviews for Sons of Norway

There are no featured reviews for Sons of Norway at this time.