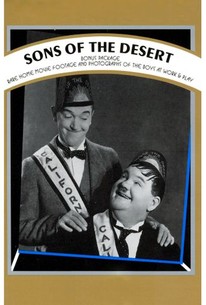 Sons of the Desert Photos

Lodge members Stan Laurel and Oliver Hardy take a solemn oath to attend the 80th-annual Sons of the Desert Convention (read: annual binge) in Chicago. That is, Ollie takes the oath, but Stanley balks. When asked why, Stanley answers that he's afraid his wife won't let him go. Ollie is appalled: "Every man must be king in his own castle." But when Ollie meekly brings up the subject of the convention with his wife Lollie (Mae Busch), she soon dethrones the "king." Lollie wants to take a vacation in the mountains, and is dead-set against her husband going around "with a pack of hooligans." But Ollie is determined to attend the convention, and to that end cooks up a scheme with Stanley. Ollie will pretend to be deathly ill; Stan will fix it so the doctor will prescribe a trip to Honolulu. Knowing that his wife can't stand going on sea voyages, Ollie will request that Stan accompany him to Hawaii--then, both men will sneak off to Chicago. A few hitches notwithstanding (Stan hires a veterinarian instead of a doctor, explaining that he didn't think the man's religion would make any difference), the boys go to the convention, where they cut up royally with practical joker Charley Chase. Alas, the Honolulu-bound boat on which Stan and Ollie are supposed to be travelling is sunk in a typhoon. While the grief-stricken wives are at the steamship company attempting to find out if their husbands survived the sea disaster, Stan and Ollie arrive home, wearing leis and carrying pineapples as "evidence" of their Honolulu vacation. When the boys find out about the shipwreck, they desperately try to escape to a hotel, but the wives arrive home prematurely, forcing Stan and Ollie to camp out in the attic. It looks as though the boys might just get away with their new plan of coming home at the same time that the rescue boats arrive....until Lollie Hardy and Betty Laurel (Dorothy Christie), attending a picture show, are treated to the spectacle of their husbands cavorting merrily before the newsreel cameras covering the Sons of the Desert conclave in Chicago. The film's final ten minutes are priceless--especially that bit about "ship-hiking." Considered the best of Laurel and Hardy's feature films, One of the top ten moneymaking pictures of 1934, it was released in Europe as Fraternally Yours and Sons of the Legion, and is also available in a crudely edited 20-minute TV version, Fun on the Run.

Charley Young
as Sons of the Desert Coterie

John Merton
as Sons of the Desert Coterie

William Gillespie
as Sons of the Desert Coterie

Charles McAvoy
as Sons of the Desert Coterie

Robert Burns
as Sons of the Desert Coterie

Al Thompson
as Sons of the Desert Coterie

Eddie Baker
as Sons of the Desert Coterie

Jimmy Aubrey
as Sons of the Desert Coterie

Chet Brandenberg
as Sons of the Desert Coterie

Don Brodie
as Sons of the Desert Coterie

Ty Parvis
as Singer
View All

News & Interviews for Sons of the Desert

View All Sons of the Desert News

Critic Reviews for Sons of the Desert

Very much an in-the-moment hit of comic bliss. And that's no bad thing.

Stan's timidity, absent-mindedness, and prissiness, along with Oliver's boisterousness, clumsiness, and heavy-handedness demonstrate their well-rehearsed partnership.

It's my favorite Laurel and Hardy feature film.

Stan and Ollie at the pinnacle of their comedic talents. A must-see for L&H and all comedy fans.

Sons of the Desert (1933) is a classic Stan Laurel and Oliver Hardy comedy - the fourth of their full-length feature films, and possibly their funniest

Audience Reviews for Sons of the Desert

Laurel and Hardy are so addictive and compulsively watchable, and this is first-rate slapstick that offers non-stop laughs with one hilarious scene after another, making us sometimes even wish it weren't so short with its running time of only a little bit more than one hour.

Another great Laurel & Hardy flick I can probably watch again and again if I owned it. I don't know why they haven't made a Laurel & hARDY definitive collectors edition DVD. 6 discs with all their shorts and movies. You can't put a price on them though, these 2 are gems they make me so happy to be alive I can't even begin to tell you. Boy thats akward writing that...begin to tell you..or begin to tell you why...or why i like them..hmmm

watched the Scooby-Doo episode where they meet Laurel and Hardy (in some sort of rift in the space-time continuum). So it put me in the mood to watch some of the real thing.

It's a classic, but very dated. Some hilarious moments and some profoundly irritating ones as well. Stan Laurel is at his best when he's losing his shit.

Sons of the Desert Quotes