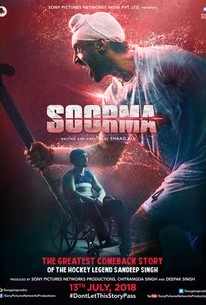 Soorma tells the story of the international hockey player Sandeep Singh, played by Diljit Dosanjh, who was paralyzed and wheelchair-bound for two years after an accidental gunshot injured him in 2006.The film's tagline is The Greatest Comeback Story of the Hockey Legend Sandeep Singh. Fighting against all odds, Sandeep got back on his feet and made a comeback to international hockey in 2008. India won the 2009 Sultan Azlan Shah Cup under his captaincy and went on to qualify for the 2012 Olympics.

At no point do you doubt that Singh will make it, nor does one feel awe at how he surmounts colossal physical and mental setbacks. The underdog story is perhaps too underplayed.

The mainstay of Soorma is, of course, Dosanjh in the titular role. He traverses the span of his character with sheer ease-a charmer as the shy, innocent, bumbling lover and mesmeric as the sportsman.

In choosing to show the personal side, the professional aspects get short shrift, and that's where the film doesn't score as well. Which is a pity because Dosanjh looks completely at home both off and on the field.

Soorma doesn't rouse as much as it should. It doesn't stop to feel its own heart beat. It tick-marks all the boxes and explores none. The goalposts are broadened - it drags home the same age-old clichés.

It's like the writer/director couldn't decide how he really felt about this man's life, hence, we the audience don't know how to feel either...but the performances end up being the saving grace, but, such potential, such waste.

Watch the film for the truly inspirational story, which can be said to be one of the biggest comebacks in Indian sports history.

What holds this film together is the performance by Diljit Dosanjh...the glint in his eye changes from impish to determined, and it is this that elevates Soorma from what would otherwise have been a run-of-the-mill sports film.

It is a pity that Ali and his team manage to draw us into the pages of his world only up to a point but mess up the most important chapter.

Soorma ensures that this triumphal journey of the human spirit is full of surprises. The checklist remains in place, but this saga of heartbreak and heroism also has undeniable heart.

Soorma is more drag than flick, a hockey film sans genuine impetus. It is nowhere near the league of Chak De India despite telling a story that is no less intense

Soorma is designed as a story of good yet tough guys: good players, good Samaritans and good administrators. There isn't much of a conflict. We always know where it is heading.

There are no featured audience reviews yet. Click the link below to see what others say about Soorma!