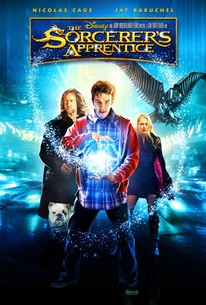 Critics Consensus: It has a likable cast and loads of CGI spectacle, but for all but the least demanding viewers, The Sorcerer's Apprentice will be less than spellbinding.

Critics Consensus: It has a likable cast and loads of CGI spectacle, but for all but the least demanding viewers, The Sorcerer's Apprentice will be less than spellbinding.

Critic Consensus: It has a likable cast and loads of CGI spectacle, but for all but the least demanding viewers, The Sorcerer's Apprentice will be less than spellbinding.

Inspired by the beloved segment of the Walt Disney classic Fantasia, The Sorcerer's Apprentice moves the setting of the story to modern-day Manhattan, where decidedly average teen Dave Stutler (Jay Baruchel) hones his magical powers under the tutelage of master sorcerer Balthazar Blake (Nicolas Cage). Malevolent wizard Maxim Horvath (Alfred Molina) is determined to claim New York City as his own. And Horvath isn't alone in his diabolical endeavor, because by joining forces with the sinister sorcerer, pop illusionist Drake Stone (Toby Kebbell) aspires to gain powers beyond his wildest imagination. Realizing that he can't take on Horvath and Stone alone, Blake recruits Stutler as his reluctant assistant and begins training him the battle that will determine the fate of the Big Apple. Teresa Palmer and Monica Bellucci co-star. ~ Jason Buchanan, Rovi

James A. Stephens
as Merlin

Oscar A. Colon
as Fry Cook

Melissa Gallagher
as Woman on the Street

Brandon Gill
as Student in Bathroom

News & Interviews for The Sorcerer's Apprentice

View All The Sorcerer's Apprentice News

Critic Reviews for The Sorcerer's Apprentice

It's a whole load of silly but there's enough fun to make this a decent slice of forgettable escapism.

The plot verges on incoherence, but The Sorcerer's Apprentice is entertaining enough if you can forgive the presence of Cage, whose brand of glum camp hasn't grown any fresher with the years.

Cage and Baruchel fail to generate a connection and, apart from Molina's Oscar Wilde impersonation, there isn't much to laugh at -- or thrill to, for that matter, since the action has been choreographed with the nerveless competence of an arcade game.

The non-stop action almost drowns out what might have been a decent screenplay...

It's an enjoyable action-fantasy adventure with a sparky script; there's even a playful pastiche of the broomsticks-coming-alive scene from the original legend, using the famous Paul Dukas music.

For my next trick, I will make the sequel disappear!

Sadly, there is precious little left of the genius that once was Cage, the man whose electric insanity made instant classics of Wild at Heart and Raising Arizona.

Nicolas Cage's performances have become infinitely more entertaining the more ludicrous the characters and the sillier the stories.

Has virtually everything you've come to know and love from an escapist Nicolas Cage action flick.

Perhaps the biggest problem with "Apprentice" lies in the script -- which is basically on autopilot from the opening scene.

A formulaic, coincidental, not-at-all-hilarious schlock-fest that can't even be saved by some obviously spendy special effects. I'd say skip this one, unless you're curious about whether or not Cage's incredible hair weave will win some kind of award.

The Sorcerer's Apprentice wasn't bad so much as it was terribly dumb.

Audience Reviews for The Sorcerer's Apprentice

I m having hard time to rate this Movie, everytime I see it somewhere and reminds me of some great Scene. It is almost funny to say so.

The film heavily relies on its special effects and its premise is genuinely uninspired to the point where the supposedly magical plot itself seems ridiculous and doesnt enchant.

Nic Cage looked like he was having lot of fun through some of the movie other parts just looked bleh. it was okay. Good kids fun. All 4 kids with us liked this movie.