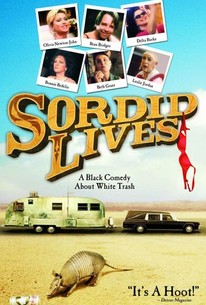 The bizarre death of Peggy Ingraham, the matriarch of a working-class Texas family, sets off fireworks within her dysfunctional family. Her determinedly proper daughter Latrelle is in denial over the fact that her son Ty, an actor trying to make it in Hollywood, is gay, and is relieved that her only brother, a gay drag queen and dedicated Tammy Wynette impersonator, has been confined to a mental institution for 23 years simply because he is gay. Latrelle's brassy sister LaVonda, however, thinks her brother should be released from the institution and has a perfect right to attend their mother's funeral. Meanwhile, Ty, who has strived hard to accept his homosexuality, realizes that there is no way he can return home for his grandmother's funeral without coming out to his mother.

A train wreck you can't help but watch.

While the film at times feels like a clumsily acted play, a surprising turn by Delta Burke carries the cast out of the doldrums of an often-strained plot line.

A movie that, while robustly performed ... has the strange effect of not so much opening up a play for the screen as closing it in.

If the film's flaws are large, so are its laughs.

There's a genuine sweetness and familial affection that shines through Sordid Lives, and enough oddball humor to keep it mooo-ving along.

Sordid Lives is a galloping riot of dysfunctional family humor. Too bad it's just not that funny.

Runs the risk of alienating its audience by going a little too far over the top and, in its efforts to be different, delivers instead, more of the same.

Texans are idiots, but they have hearts as big as the great outdoors--I get it already.

Its stereotypes are insulting, its jokes are unfunny, and its emotions are labored. Sordid Lives is a sordid movie.

If only the lives in Sordid Lives were sordid. Instead, the movie might better be titled Loud Lives.

Check this out if you're in the mood to laugh at humanity's looniness.

Things always feel about a half step from spinning wildly out of control, but Sordid Lives remains a guilty pleasure that you enjoy and keep to yourself .

Very similar to the way things are at home in Mississippi for me!! hehe