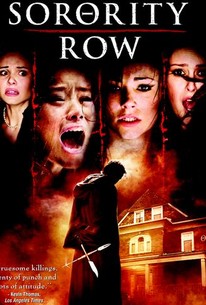 Critics Consensus: Though it's slick and stylish, Sorority Row offers nothing new to the slasher genre and misses the mark both in its attempts at humor and thrills.

Critics Consensus: Though it's slick and stylish, Sorority Row offers nothing new to the slasher genre and misses the mark both in its attempts at humor and thrills.

Critic Consensus: Though it's slick and stylish, Sorority Row offers nothing new to the slasher genre and misses the mark both in its attempts at humor and thrills.

A sorority prank gone wrong leads to a bloody murder spree in this slasher film featuring Rumer Willis, Audrina Patridge, and Carrie Fisher. It was supposed to be a practical joke, but no one was laughing after a girl in the prime of her life had been accidentally murdered. Desperate to go on with their lives and avoid taking responsibility for their actions, the surviving sisters and their male accomplice agree to dump the body and never speak of the incident again. Just after graduation, however, a mysterious killer begins stalking everyone who harbors the bloody secret, leading the survivors to fight for their lives against a masked maniac with a deadly modus operandi.

Typical slasher film packed with boobs, boys, booze and blood. Go into Sorority Row with your brain on cruise control and just enjoy the movie for what it is: a gore party.

It's yet another '80s slasher remake, so you know the drill...er, the tire iron pimped out with blades.

Call me the sarcastic sister, but the only thing screaming in any convincing way here are the cheap look, epileptic direction, and off-key, "edgy" humor.

Sorority Row is an interminable mess of a film that juggles more characters and undeveloped subplots than it can handle and even manages to bungle the setup.

The tedious flick offers little more than a few scares, and plenty of boobs. And we're not just talking about the cast.

The "scary'' moments are of the sneak-up-on-you-from-behind variety, but there's little suspense.

It's taken me four years to appreciate how funny this film is. As a straightforward slasher, it disappoints, but the humour is undeniably killer. Pipes and Harshman are worthy of diva worship for their inspired performances.

A sharp, funny and highly entertaining little film that in no way deserved the critical drubbing it received back in 2009. Turn your brain off and get ready to laugh, folks.

One of the weaker entries in 2009's horror genre.

I enjoyed it enough to last until the credits. [Full review in Spanish].

This is a funny, bitchy and gory film that exists solely to entertain and I would argue is better than about 80% of the slashers that have come out in the past decade.

By the time the killer's identity is finally revealed you'll be amazed at how screenwriters make big bucks penning lines like, "Who the hell lit the house on fire? Shit!"

It's like the writer took different horror movie scripts put them all together and end up with a non scary ,predictable,annoying and boring result .And among all those people who died in this flick ,so did originality.

Poor! Scary but the acting just made it terrible!

Cast: Jamie Chung, Rumer Willis, Audrina Patridge, Carrie Fisher, Briana Evigan, Matt O'Leary, Matt Lanter, Margo Harshman, Julian Morris, Leah Pipes Director: Stewart Hendler Summary: When a prank results in the accidental death of a Theta Pi sister, the sorority's members keep the crime under wraps. But as graduation rolls around, a masked killer begins stalking and slaying the girls responsible for the death. Someone is out for revenge, but who could know about their dirty little secret? My Thoughts: "Typical in all aspects, but I really liked the style of some of the killings and the cattiness of the girls. The smart-ass remarks from Cassidy and Jessica was entertaining. But the film failed to scare me or to even make me jump. The killings happened quite fast, and there just wasn't enough blood and gore for it to be a slasher. Big disappointment for me."

"Well, to the bitches of Theta Pi, I'm saying farewell." When a couple of members of a sorority pull a mean-spirited prank, one of them ends up dead. The others cover up the incident in order to not ruin their own bright futures. But a few months later they find out that someone knows about what they did, and they're angry about it. Angry enough to kill. Sorority Row is nothing more than another slasher flick where lots of hot chicks get picked off one by one. And it's not a particularly good one, either. Some of the kills are a little cool/creative, but the movie is only entertaining sporadically, and the final reveal of the killer and their motive is outright ridiculous. As are many of the decisions made by the characters. The movie is also far too long, and spends too much time in the inconsequential lives of characters that are kill fodder. If this is on tv and you have a desire to see a bunch of sorority cliches of varying bitchiness get killed, and you really have nothing better to do, it's not a complete waste of time. Just keep your expectations suitably low when it comes to scares, T&A, cleverness, and anything else that the best movies in the genre do so well.