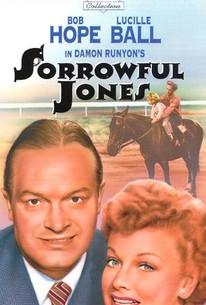 This second of four film adaptations of Damon Runyon's Little Miss Marker is tailored to the talents of Bob Hope. A shifty Broadway bookie, Sorrowful Jones (Hope) becomes a reluctant foster parent when an anxious gambler leaves behind his little girl Martha Jane (Mary Jane Saunders) as a "marker," or IOU. When the father is killed by mobster Big Steve Holloway (Bruce Cabot), Sorrowful decides to hide Martha Jane from the authorities, lest the poor girl get tossed in an orphanage. Lucille Ball co-stars as Sorrowful's erstwhile girlfriend Gladys, who along with Mary Jane is instrumental in "reforming" the cynical Jones. The climactic scenes, wherein Sorrowful tries to smuggle a horse into a hospital in order to bring the little girl out of a coma, deftly combines slapstick with pathos. A remake of 1934's Little Miss Marker, which starred Shirley Temple in the title role, Sorrowful Jones was itself remade in 1962 as the Tony Curtis vehicle Who's Got the Action; it was filmed again in 1980, once more as Little Miss Marker, with Curtis as the villain and Walter Matthau in the Bob Hope role.

Michael A. Cirillo
as Horseplayer

Selmer Jackson
as Doctor
View All

Bob Hope and Lucille Ball headline this Damon Runyon tale of personal redemption that has an incorrigible boorish street slime caring for someone else, in this case, a little orphan girl (awww). Although obvious as all get out, and predictable, the Runyon-isms and star wattage manage to power on through to the conclusion. Not bad.