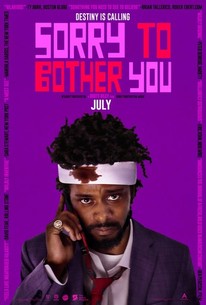 Sorry to Bother You Videos

Sorry to Bother You Photos

In an alternate present-day version of Oakland, black telemarketer Cassius Green (Lakeith Stanfield) discovers a magical key to professional success, which propels him into a macabre universe of "powercalling" that leads to material glory. But the upswing in Cassius' career raises serious red flags with his girlfriend Detroit (Tessa Thompson), a performance artist and minimum-wage striver who's secretly part of a Banksy-style activist collective. As his friends and co-workers organize in protest of corporate oppression, Cassius falls under the spell of his company's cocaine-snorting CEO Steve Lift (Armie Hammer), who offers him a salary beyond his wildest dreams.

News & Interviews for Sorry to Bother You

View All Sorry to Bother You News

Critic Reviews for Sorry to Bother You

Sorry to Bother You is as much a character-driven story about the gentrification of Oakland -- and the Bay Area writ large -- as it is an absurdist anti-capitalist fable.

A hilarious, intelligent, and socially relevant satire of American business and capitalism, and hands-down one of the best films of 2018.

While Sorry to Bother You is off-the-wall and hilariously bizarre, its message is firmly grounded in the recognisable injustice of a system whose decadence is seeing it teetering on the edge of collapse.

This movie, the directorial debut of rapper and activist Boots Riley, explores the racial, class and financial gulfs of human society. It does so in a way that is bizarrely funny and awkwardly confronting.

Pinballing frenetically between amusement, absurdity and anger, this is an unruly piece which takes pointed pot-shots at coercive capitalism before galloping toward an impressively unhinged third act.

While it's inevitably disappointing to watch this hot mess fly off the handle the way it does, the movie's ideas have an odd way of sticking even when the delivery method stalls.

...Boots Riley goes for broke, and you'll either go for that or you won't.

So blazingly original, it demands to be seen, preferably with an audience that also doesn't know what it's in for.

[Sorry to Bother You] offers a comically insightful look at racism and slavery.

Boots Riley has a fresh and unique style that's all his own, and it's more than welcome in today's blockbuster-packed summers.

It will inspire a cult following and plenty of fans - but it is not everyone's cup of tea.

A look at greed with an anticapitalistic approach.....highlighting slave work by dehumanizing workers.

Audience Reviews for Sorry to Bother You

The trailers to this movie led me to believe it would be sort of a dark comedy with some social commentary, and yeah, that's definitely part of it, but damn is that only PART of it. This movie is godamn wild, and it takes several turns (especially in it's final act) that you're either going to go with or going to be incredibly turned off by. Personally, I was surprisingly willing to be along for the ride. There's an anarchic energy to the whole movie that never ends even in it's most banal moments so that even when it truly goes bonkers, it never seemed too out of the ordinary to the films world for me. It's so wildly original too, that I genuinely had no idea where it was going to go, and my predictions were usually wrong. It doesn't all work, some of it hits the nail on the head a little too hard and some moments (especially the final moments, literally the last seconds of the film) seem more for shock value than anything else, but it's more hits than misses. It's probably going to be divisive movie, but for me I was surprisingly with it.

Although the sharp sense of humor is only one step away from being laugh-out-loud hilarious, this is a smart absurdist satire on conformism and modern alienation that couldn't feel more realistic even as it confidently moves towards surrealism in ways that are quite unexpected.

There are many ways of calling a film bizarre. When it comes to independent ventures, it really can go back and forth from being accessible to a mainstream audience. With the release of this year's Sorry to Bother You, the film has a premise that may attract fans of comedy/drama, but, when this movie truly kicks into gear, it's really a toss-up whether or not it will sit right with you. For fans of the medium of film no matter how strange, Sorry to Bother You may just end up being one of the best movies of 2018 to date, as it is to myself. For all its quirks and strange twists and turns, here's why I can't recommend Sorry to Bother You enough if you're ready to explore a film that explores the weird side of cinema. Following Cassius Green (sort of set in an alternate reality to our own), he receives a job at a telemarketing company, where he discovers a new voice and is able to make a huge profit for himself. Propelling himself into greed and forcing his life to spiral into a metaphor that reflects the social issues of our daily lives, Sorry to Bother You represents the horrible side of our society while also managing to be an entertaining and eye-opening piece of filmmaking. The core premise is very easy to follow, but once the twist occurs, sending this film on a course that you'll either buy into or find too bizarre to comprehend, it's true message begins to reveal itself. This movie has one of the most surprising turns that I've been able to witness in quite some time. Not only is it visually shocking, but it also manages to be a slightly comedic aspect to the movie while also being a social commentary for the mature audiences, which is really just writer/director Boots Riley displaying his creative mind to the world. Being his directorial debut in the feature film category, I can't wait to see where his career goes next. I truly believe that he has the potential to create stories that will be loved by audiences on a yearly basis. Riley definitely has a knack for telling a great story, even in the subtlest of ways. Although I pretty much loved this film from start to finish, upon reflection I must say that the first act of this film goes suffer from pacing issues. I feel as though Sorry to Bother You is trying to set up a few elements at the beginning that may not land with some viewers, but that's only because it needs to be able to pay off in the final act, so it's acceptable. Still, I found myself enjoying the movie at first, but it took a while to really hook me. I feel that will happen with other viewers as well. That being said, when the film concludes, I do believe that viewers will look back on the movie as a whole and appreciate the first act more. For that reason, I can't say it's a true glaring error, but it is definitely worth mentioning. In the end, Sorry to Bother You mixes a few genres together to make one wacky ride of a film. There are visuals that will stun you, an over-arching story that will open your eyes to our ever-evolving society, and a quiet editing style that seamlessly takes you through the film with ease. This movie is absolutely not for everyone, especially due to the fact that the third act is very "out there," but, if you're prone to liking movies solely based on a good execution, regardless of how strange it becomes, then I can't recommend this movie enough. Sorry to Bother You is one of my favourites of 2018.

Sorry to Bother You Quotes