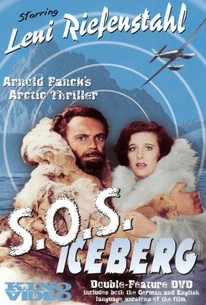 In this realistic adventure, an explorer sets off to find the records of the failed Alfred Lothar Wegener expedition to Greenland. It is a dangerous trip, and the man brings with him three veteran explorers, and a wealthy financial backer who is going for fun. The hero is so determined to find these records that he ignores all dangers and continues on. As a result, the party find themselves marooned on an iceberg. Meanwhile, his wife, a famous pilot, takes off after them, but ends up crashing on the berg with them. Gradually members of the party begin to die until Major Udet and a flotilla of kayaking Eskimos find and saved them. Much of the film was shot in Greenland, and as an added touch of realism, the story included input from famed polar explorer Knud Rasmussen, and two members of the real Wegener expedition from 1929-30.

There are no critic reviews yet for S.O.S. Eisberg. Keep checking Rotten Tomatoes for updates!

There are no featured reviews for S.O.S. Eisberg at this time.