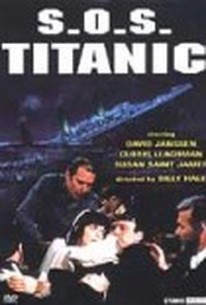 An Anglo-American co-production, S.O.S. Titanic is a costly, 150-minute reenactment of the infamous sea disaster of 1912. Heading the cast is David Janssen as millionaire John Jacob Astor, who went down with the Titanic, and Cloris Leachman as raucous Denver dowager Molly Brown, who didn't (for the record, Leachman had previously played Brown on a 1957 episode of the TV anthology Telephone Time). Third-billed is Susan Saint James as fictional passenger Leigh Goodwin, who carries most of the dramatic load. Written by Hallmark Hall of Fame veteran James Costigan, the made-for-television S.O.S. Titanic premiered September 23, 1979. In subsequent network and syndicated showings, the film was pared down to 102 minutes. ~ Hal Erickson, Rovi

Kate Howard
as Countess of Rothes

Helen Mirren
as Stewardess: May Sloan

When the drama steers a factual course, it's absorbing viewing. Unfortunately, the three hours are padded with superficial romances and characters that never take shape because the script keeps zigzagging from reality to fiction.

Complete and utter garbage, S.O.S. Titanic is a half-assed TV movie that embarrasses itself. There's virtually no attempt at authenticity, as the ship is clearly the Queen Mary, and the interior sets don't look anything like the Titanic. Additionally, many of the long shots of the ship are just colorized scenes from A Night to Remember and don't match-up with the models or exterior sets. The performances are universally bad (except for maybe David Warner and Susan Saint James), and the historical inaccuracies are beyond egregious; they don't even get the date of the sinking right. S.O.S. Titanic is a colossal mess that has no understanding of the Titanic disaster, and it shows in every frame.