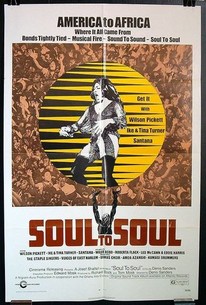 No longer professionally linked to his brother Terry Sanders, screenwriter/director Denis Sanders returned to the documentary format in which he'd started his career in the mid-1960s. After enjoying success with the up-close-and-personal Elvis: That's the Way It Is, Sanders decided to focus his attention on the world of gospel music. His 1971 feature-length documentary Soul to Soul follows a group of American gospel luminaries during a tour of Ghana, celebrating the 14th anniversary of that country's independence. Featured performers include Wilson Pickett, Ike and Tina Turner, Santana, Roberta Flack, Les McCann, The Staple Singers, Willie Bobo and Eddie Harris. Soul to Soul proved to be Denis Sander's last documentary effort; his next film was the love it-or-hate it horror spoof Invasion of the Bee Girls.

Critic Reviews for Soul to Soul

There are no critic reviews yet for Soul to Soul. Keep checking Rotten Tomatoes for updates!

There are no featured reviews for Soul to Soul at this time.