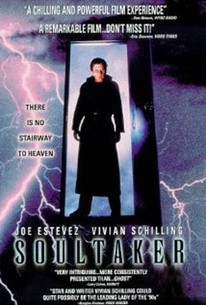 Two young people brought to the edge of death find themselves dragged back by a mysterious stranger in this horror story. When four teenagers are seriously injured in an auto accident, a spectral man dressed in black (Joe Estevez) arrives to claim their souls. But it seems that the Soultaker has arrived too soon; as he tries to draw their spirits from their bodies, it becomes evident that two of the kids, Natalie (Vivian Schilling) and Zach (Gregg Thomsen), aren't actually dead, but merely comatose and will soon recover. The Soultaker is determined to claim four souls, no matter how many have actually passed on, and he finds himself locked in a desperate struggle to take the other two victims with him, whether they like it or not. Vivian Schilling, who plays the female lead in Soultaker, also wrote the film's screenplay.

Much better with the MST-3K guys riffing on it.

A half-star movie experience, with another three and a half stars for the MST3k treatment.