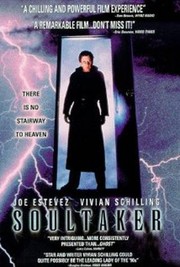 Melvin V
August 19, 2016
This is a fun movie. Vivian Schilling is gorgeous and she's a great actress. The creeps at MST3K ripped this movie, but what have they done except play with puppets and trash the work of others? Bill Corbett who played Crow T. Robot wrote the horrible movie Meet Dave. Soultaker had a budget of $242,000 while Meet Dave cost 60-100 million. I wish Vivian would release this on dvd with an audio commentary featuring her and Estevez. Or better yet, make a sequel!

Emanuel P
June 14, 2014
Saw the Mystery Science Theater version and that was the only thing working for it.

Larry C
April 24, 2014
The byproduct of when people with no talent write and star in their own movies (M. Night Shamaylan are you listening?), Soultaker uses this formula to create a perfect storm of bad film making. "Starring" Joe Estevez, brother of Martin Sheen (were Don Swayze and Joey Travolta busy?), Soultaker is about a group of teens who get into a car accident because their stereotypical 80s douchebag buddy, who can only be described as a homeless man's Brian Bosworth, crashes them into a tree. Preordained to die, the two protagonists tempt fate and survive, but in a comatose state (the audience can relate) and now they must escape the Soultaker as he tracks them down in a sort of dream world as he tries to take their souls. It's "The Final Sacrifice" meets "Nightmare on Elm Street" meets "Final Destination" meets an extra chromosome.

The amazing part of this movie is that nearly 2 decades before the advent of modern 3D movie technology, they made it feel like Joe Estevez was actually popping out of the screen and taking my soul as I watched this movie. However, the true star of the picture is the jaw of Robert Z'Dar. A snub on the list of the 8 Modern Wonders of the World if there ever was one, your jaw will drop (pardon the pun) when you catch a glimpse of this guy. Forget 3D, this guy's jaw is in 4D. He puts the "man" in mandible. What was I saying? Oh yeah, best movie ever.

Carol M
½ January 20, 2014
MST3k's Pearl described Soultaker perfectly, "Skin Peelingly Bad" She was right. The main characters in this stinker are an unknown Estevez and the canned creepy burger king guy. But thanks to the MST3k gang, I laughed throughout this hour of what would otherwise be a waste of my soul, but I strongly advise only watching it on MST3k. And is Charlie the real drugged out Estevez?

Tim S
August 13, 2013
This movie is quite genius in its badness. Like a lot of latter 80's horror movies, it spends most of its time ripping off Hellraiser, and not really to its benefit. Soultaker is about as bad as bad gets, but in this instance, it oozes enough charm from being horrible to get itself by. I personally don't care if Joe Estevez confusingly reminds me of Martin Sheen. I think it's something of a benefit for him personally because he's not really anything to write home about, as many people reading this might already know. This is easily one of the best pieces of Mystery Science Theater 3000 fodder out there, and if you can get your hands on a copy of it, you'll understand why. Everything is pretty much thrown out the window. Acting, lighting, editing, sound design, story... just everything. It's all bad, but laughably so, making it one of the guiltiest pleasures you're ever likely to find, and that's saying a lot when it comes to really bad movies.

Wes S
March 19, 2012
Very cheap but the concept isn't too bad. It's also a fun MST3K episode. Characters aren't too bad and it has some dark moments, plus it was filmed in my home state.

Jason T
½ February 6, 2012
Just a head ups, my opinion is based solely on the MST3K version. With that said Soultaker is one of the most hilariously horrid movies you will ever find on this planet. Joe Estevez is to B what Paul Newman is to legitimate film. There couldn't possibly be a more diluted premise then this, and you will laugh every second of this terrible journey. Again, I am basing this off the MST3K version.

Hannah M
December 30, 2011
This movie is silly and cliched and the writer/lead actress can neither write nor act worth anything. However, that being said, there was a moment or two that could have worked if done by someone with talent. I'm kind of a sucker for stories about evil villains falling in love, and so I did kind of enjoy the plot point about the soultaker's sudden interest in the heroine, but every time I felt like it was maybe heading toward something potentially entertaining, it then hit a clunker of a line or an awkward acting moment and reminded me that, nope, this movie is sucky.

Rob D
½ December 3, 2011
This movie sucked so much. The star of the movie only wrote the movie so that she could get a gig. This is impossible to tell anyone to watch unless they watch the MST3K version, since they are perfect at ripping this horrible excuse of a movie to shreds. It isn't as bad as The Starfighters, but it's pretty close. STAY AWAY FROM THIS MOVIE! The acting is atrocious. The only redeeming feature of this film is Joe Estevez. Robert Z'Dar was new to me seeing as how I had never seen Maniac Cop before I saw this. I laughed at his chin, but his voice did not match his body at all. I don't know if he was pulling a Clint Eastwood and acting in a forced manly voice other than his real one, but it just didn't seem natural.

William S
October 12, 2011
The deservedly overlooked Soultaker tells the story of four teenagers who crash their car into a telephone pole a high speeds, but don't die- at least not right away. Although their bodies enter a coma, their souls remain conscious, although totally unaware of what's happened to them. Before long they're attacked by the titular Soultaker (Joel Estevez), one of many angels of death, who has come to... wait for it... take their souls. Will the teens elude fate? Can they make it to the hospital before their parents pull the plug on them? Did they hire any writers, or just mash together clichés from other horror films?
So yeah, Soultaker is basically another dead teenager movie, but without all the blood and gore. As such, it won't cause utter revulsion in most reasonable audiences, like the Hellraiser and Friday the 13th sequels did, but doesn't offer much of an attraction for goremiesters, or anyone else for that matter. The problem is that while there's nothing particularly horrible or inept about it, there's nothing very good about it either. It looks rather cheesy, none of the characters are especially interesting, and the whole thing proceeds rather slowly.
It's also not all that scary. Sure, there's a bad guy trying to kill them (although since they're already disembodied spirits re-kill might be a better term) but he moves rather slowly, like he doesn't really want to catch them. Which is odd, because if he doesn't, he'll have to give up his soul as a penalty. Maybe he's having a hard time because Natalie (Vivian Schilling) reminds him of his girlfriend from back when he was human, and he's beginning to fall in love with her. Between the kill or be killed aspect of his job, and the creepy affection he seems to feel for Natalie, it's possible that the Soultaker isn't really evil, but is himself just a victim of fate. Unfortunately the movie keeps going back and forth on this question, so we never get a straight answer.
The movie also fails to answer important question about the state the teenagers find themselves in. For starters, what exactly are they? I get that they're disembodied spirits, but what is their relation to the material plane? They're not ghosts; they can interact with their physical environment in ways like opening doors and firing shotguns, and they also appear bound by the laws of gravity. But they can't be seen or heard by other people, and I'm pretty sure there was a brief shot which suggested they don't appear in mirrors, which is all the more confusing because usually things without a reflection don't have souls. I also would like to know more about the rings that the Soultaker uses to take souls, but no luck there either.
I was unable to find much online about the production or marketing of this film, except that co-star Vivian Schilling also co-wrote it and co-produced it in hopes of starting a successful acting career. That didn't happen, but apparently she did become a fairly successful writer of supernatural fiction, so at least some good came out of this project. All in all, Soultaker isn't a terrible movie, or unwatchable, but it lacks any compelling reason for you to watch it. There's a lot worse out there, but there's also a lot better.

Jeff B
½ September 12, 2011
Not a bad movie at all, really. Just low budget. I actually liked this better than "Flatliners", which shares some of the same themes and had a MUCH higher budget. The MSTing was still terrific though.

Sarah A
½ July 4, 2011
Hilarious with the mst3k guys. Never watch a bad movie without them.

peter h
½ September 9, 2010
I'll make this short SOULTAKER was an ok atempt at a horror film but with a fare few plot holes it fails sadly. 5/10

Robert B
½ January 31, 2010
The film lives up to it's title it will take your Soul away if you watch it. The budget seemed decent for a low budget film but there simply was no story and nowhere to go as the direction was called in and the actors had to get back to there night shifts at Denny's. Just a half-baked idea but a full waste of the viewers time.
Page 1 of 3