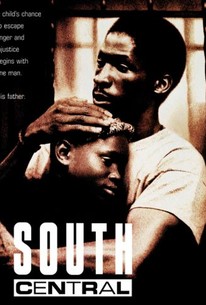 Glenn Plummer delivers a powerful performance in this angry film based on Crips, a novel written by South Central Los Angeles high school teacher Donald Baker, and directed by Steve Anderson, who served time in prison. Plummer plays Bobby, a young black man trapped in a self-perpetuating cycle of hatred, incarceration, and bloodshed. On his first day out of prison, he comes back to the streets of South Central LA and the only family he knows --the gang. He finds that his best friend Ray-Ray (Byron Keith Minns) is now the leader of the Deuces. Ray-Ray, with plenty of sweet talk, easily talks Bobby into committing a murder, killing a rival gang leader. But before the killing Bobby finds that his girlfriend Carole (LaRita Shelby) has given birth to his son. He also sees that she is becoming too dependent on her drug supply. After the killing, Bobby is hauled back into jail for a ten-year stretch. In jail, Bobby undergoes a transformation. Introduced to the Muslim community and mentored by an older convict named Ali (Carl Lumbly), Bobby begins to read W.E.B. Du Bois and Martin Luther King. He learns about self-respect and how gangs use people like him. When he is once again released from prison, Bobby is a new man. But South Central has gone from bad to worse. Carole, now completely addicted to cocaine, works as a hooker to support her habit. He also discovers that Ray-Ray has recruited his 10-year-old son Jimmie (Christian Coleman) as a junior gang member, stealing car stereos. Jimmie looks upon Ray-Ray as a role model and Bobbie must find a way to save his child from the violent and doomed future of a gang member.

Rana Mack
as Girl in Club

Michael A. Lerner
as Broken Nose

News reports try to tell us what happened in Los Angeles, but fail, because they are limited to the facts. Movies like this one let us feel the emotions.