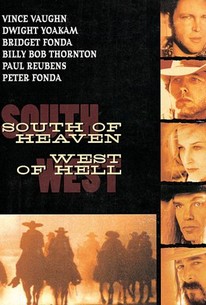 Critic Reviews for South of Heaven, West of Hell

Sharon Stone once likened dating Yoakam to 'eating a dirt sandwich.' Viewing his directorial debut, it's apparent that she was being too kind--after all, just watching his film is like eating a sh*t sandwich.

It's best not to ask too many questions - better just to switch your brain to stand-by and enjoy the show.

The conflicts, vistas, rhythm and mood are of a piece, but not every personality or circumstance is fully thought through.

Audience Reviews for South of Heaven, West of Hell

There are no featured audience reviews yet. Click the link below to see what others say about South of Heaven, West of Hell!