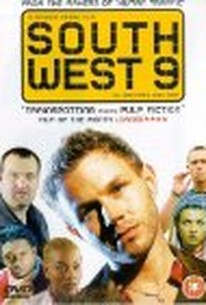 A group of would-be hipsters looking for a good time find more trouble than they expected in this edgy comedy. It's a typical night at the Dog Bar, a club in the Brixton section of London: Helen (Orlessa Edwards), a career-obsessed young businesswoman, is trying to relax; Mitch (Mark Letheren) and Jake (Stuart Laing) are looking for women who'd like company for the evening; Freddy (Wil Johnson), an up-and-coming songwriter, is observing the goings-on; and Kat (Amelia Curtis) is waiting tables in an effort to live down her heritage as the daughter of wealthy parents. By the end of the night, Helen has lost her briefcase and the irreplaceable computer disc inside, Mitch has been dosed with LSD, and Jake rubs a drug-dealing gangster the wrong way. South West Nine was the first feature from writer and director Richard Parry. ~ Mark Deming, Rovi

Surprisingly entertaining, even though we can see the joins.

There are no featured reviews for South West 9 at this time.