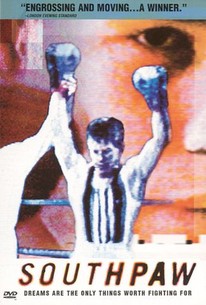 A more winning smile, a more heartwarming story you will surely not see at this year's Festival. Southpaw is the story of Francis Barrett, a lad from the marginalized Travellers' community of western Ireland, who within fifteen months worked his way from the junior league of boxing to represent Ireland in the Atlanta Olympic Games. Francis began training with a local coach, Chick Gillon, as a young boy. Lacking proper training facilities, let alone electricity and running water at home, Francis early developed a fighting spirit and the talent and ambition to match. More importantly, he got a great deal of love and support from his large family and Chick, a true mentor. The filmmakers continually crosscut between fighting and family, both integral elements of Francis's persona. When he speaks of his fellow Travellers feeling ashamed when they are refused service, we see it in his Southpaw punch. Barrett chronicler and insightful sports writer Tom Humphries claims that "Ireland wanted him to conform to the working class," while Francis felt that what the Olympics could do was bring respect to his people. By the film's end, coaches and supporters who do not hail from his area claim the only way for him to win in Sydney and beyond is to leave his past behind: "He must decide that he is a boxer first, Traveller second." But Francis's lungs are filled with fresh Galway air, and his clear eyes sparkle with Irish loyalty, an all-too-rare quality. We'll be rooting for him.

Athought-provoking film about sports as a training ground for character and a testament to patience as an athlete's best friend.

...a simple and refreshing diversion.

The filmmakers accomplish a lot with limited means, but the piece overall feels sketchy and incomplete.

There are no featured reviews for Southpaw at this time.