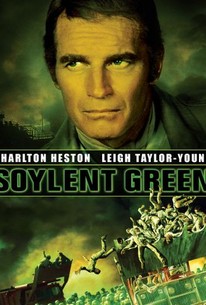 Critics Consensus: While admittedly melodramatic and uneven in spots, Soylent Green ultimately succeeds with its dark, plausible vision of a dystopian future.

Critics Consensus: While admittedly melodramatic and uneven in spots, Soylent Green ultimately succeeds with its dark, plausible vision of a dystopian future.

Critic Consensus: While admittedly melodramatic and uneven in spots, Soylent Green ultimately succeeds with its dark, plausible vision of a dystopian future.

This 1973 film, based on the novel by Harry Harrison, won a Nebula Award for "Best Science Fiction Film" and marks the final screen appearance of Edward G. Robinson. It predicts a Malthusian future for the human race; overpopulation has overstressed the food-production capacity of the planet, resulting in desperation at all levels. Detective Thorn (Charlton Heston) shares an extremely tiny "apartment" with retired researcher Soi Roth (Edward G. Robinson). In the overpopulation depicted here, it is impossible to get anywhere without walking over, under, or around someone. Thorn has been hired to investigate the murder of a top industrialist (Joseph Cotton), the man whose company manufactures the life-sustaining wafers called Soylent Green, the only means of survival for the swarming hordes of poor people.

Mike Henry (I)
as Kulozik

Soylent Green is Edward G. Robinson's movie. As a man who remembers the wonders of civilization before it died, he is witty, cultivated and endlessly appealing.

The somewhat plausible and proximate horrors in the story of Soylent Green carry the production over its awkward spots to the status of a good futuristic exploitation film.

Their 21st-century New York occasionally is frightening but it is rarely convincingly real.

Not a terribly good movie, it's nonetheless not a bad guess at a future...

Grounded in such a recognizable reality that the science-fiction elements are almost indiscernible.

It seems, for all its futuristic malarkey, as contrived and antiquated a melodrama as may be seen any night on the Late Show.

It's a hard one to judge, and while I enjoyed watching it, I don't see myself watching it again...I guess an average score then, but I am glad I finally watched it.

Where so many science fiction visions of the era have dated, this gritty creation of a depressed (and depressing) future... looks all the more real.

Chuck Heston as a very nearly corrupt cop in a messed up future New York peeling back one helluva ugly scab on societal expediencies. Still vibrant, still timely, still effectively told and loaded with a top notch cast. Yet it gets no respect. So wrong!

The greenish cinematography and '70s visuals for a futurist dystopia look terribly dated today, and even if the film has an interesting idea and a beautiful death scene, Fleischer's direction (more focused on the procedural and the action) makes it look silly and unimaginative.

In a near future where the world is vastly over-populated and nature's resources have become decimated, a cop investigating the murder of a rich executive uncovers his globe-spanning uber-corporation's dirty little secret. Soylent Green is clearly a victim of its own reputation as its almost inevitable that you will already know how it ends, which removes the shocking revelation that would have provided the punchline to the story. As it stands, the film is surprisingly accurate in its predictions and is one of the first corporate conspiracy theory stories to reach the big screen; it is also one of the first to marry the styles of Film Noir and science fiction. The problems lie in its rather dated and cheap looking visual effects and rather workmanlike, TV quality direction. I would also have to say that with the exception of Edward G. Robinson's ageing bookworm, none of the cast are particularly likeable; Heston comes across as a selfish and corrupt asshole and women in this future society are nothing more than "furniture" - essentially live-in prostitutes. Worth a watch if you are one of the few who haven't absorbed the big plot twist through cultural osmosis but otherwise it's little more than a dated curiosity.

No idea why this movie gets so much bad reviews these days, sure, it's the "future" with people wearing 70s haircuts and clothes, big fucking surprise. The message is blunt, but still effective, and while the detective parts of the story don't go anywhere seeing the characters enjoying such mundane things that we take as granted today are fascinating to watch. Enjoy your apples, steaks and alcohol, you might not see them in the future.