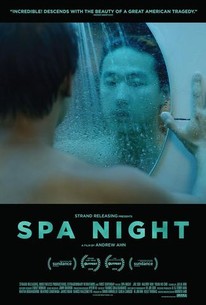 Critics Consensus: In depicting one man's sexual awakening, Spa Night explores the tension between tradition and individuality with tenderness and compassion.

Critics Consensus: In depicting one man's sexual awakening, Spa Night explores the tension between tradition and individuality with tenderness and compassion.

Critic Consensus: In depicting one man's sexual awakening, Spa Night explores the tension between tradition and individuality with tenderness and compassion.

The atmospheric SPA NIGHT is a portrait of forbidden sexual awakening set in the nocturnal world of spas and karaoke bars in Los Angeles' Koreatown. David Cho (Joe Seo in a breakthrough performance), a timid 18-year-old living with his financially-struggling immigrant parents, chances upon a secret cruising spot when he takes a job at an all-male spa. There he begins to realize hidden desires that threaten his life as a dutiful son and student.

[It] takes its time letting his desires to build up, reminding us that this is more than a coming-out coming-of-age story as it alternates and intermixes the struggles of immigrant life, and the particular condemnations of nontraditional masculinity.

Although Seo and Ahn are able to tap into David's confusion and agony -- especially when filtered through the lens of his damningly hopeful parents -- there's never much more to David (or his story) than that.

Writer-director Andrew Ahn has made a confident, assured, low-key debut that's a textbook example of how to make a compelling small-budget movie.

The assured feature debut by Andrew Ahn is also the story of a young gay man's sexual awakening, and its sensitive lead performance affectingly expresses the tension between tradition and personal identity.

There's even a sense that not enough happens but the repression-a lot of glancing, no touching-feels right with the tone, and especially within the cultural context, of the film.

Even with its flaws, Spa Night is an extremely personal film. We need more of those.

With its deft, open-ended ending, Spa Night paints a poignant picture of the role gay men and women are playing in elevating and expanding the definition of success in the early moments of this new Millennium.

The film's specificity, combined with Ahn's sensitivity towards his own characters, go a long way to establishing Spa Night's unique placement among US cinema.

Writer-director Andrew Ahn and cinematographer Ki Jin Kim deliver a sharp-looking movie with a congruous visual and tonal concept on a presumably low budget, and it all feels genuine and resonant enough to halfheartedly recommend.

Ahn and cinematographer Ki Jin Kim work with levels of color and quiet stylization that gently nudge the film into sweet moments of cinematic subjectivity.

he movie is packed with dramatic inner rhymes and startling colour shifts that convey the challenges and pleasures of breaking away from your parents, even if -- especially if -- you love them.

Coming out as queer is always a difficult process, as is making an interesting movie about coming out in 2016, but Andrew Ahn's meditative Spa Night pulls it off.

There are no featured audience reviews yet. Click the link below to see what others say about Spa Night!