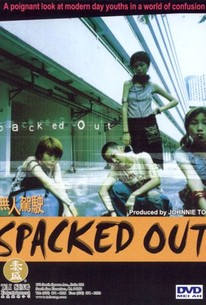 Lawrence Ah Mon ends a 12-year absence from the Hong Kong film with this gritty urban drama about four school girls, angry and adrift in Hong Kong. Cookie (Debbie Tam) is a 13-year-old who pines for her mother, who abandoned her and her abusive father; for her best friend Mosquito, who was carted off to reform school; and for her would-be boyfriend, who won't return any of her calls. Always late and frequently on the receiving end of teachers' ire, she has fallen in with fellow malcontents. One is Banana (Angela Au Man-Si), who deals drugs and who gets money for sex as a part of the "phone date" ring she's in. Brandishing a sad, world-weary sexuality at a remarkably young age, she is already an expert on abortions as a junior high-school student. Also in the quartet is Bean Curd (Maggie Poon Mei-kei), an aggressive punkish lesbian who is extremely protective of her girlfriend, Sissy (Christy Cheung). The group goes from karaoke bar to mall and back with their cell phones in hand. As the film progresses, Cookie learns that she is pregnant. Introverted and lonely, she agonizes over what to do with her unborn child and with her life as she dutifully tags along with her wayward friends.

There are no critic reviews yet for Spacked Out (Mo yan ka sai). Keep checking Rotten Tomatoes for updates!

There are no featured reviews for Spacked Out (Mo yan ka sai) at this time.