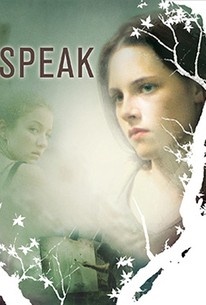 Award-winning short filmmaker Jessica Sharzer makes her feature debut with the teen drama Speak, based on the young-adult novel by Laurie Halse Anderson. Kristen Stewart stars as high school freshman Melinda, who has lost her ability to speak. Ever since a traumatic event that occurred at a party over the summer, she has chosen to remain silent. She's abandoned by her friends, while her mother Joyce (Elizabeth Perkins) is too wrapped up in her own problems to notice. By recalling the details of the past situation, it becomes clear that a date rape occurred. Yet no one has offered her support in order to deal with the psychological consequences. Eventually her art teacher Mr. Freeman (Steve Zahn) reaches out, helping her develop ways to express herself. Also starring Hallee Hirsh and Eric Lively. Speak premiered at the Sundance Film Festival in 2004 as part of the American Spectrum competition.

A. Remy Brommer
as Yearbook Photographer

A strikingly relevant and underseen slice-of-life drama with an award-worthy turn from Kristen Stewart.

The film's entirely commendable message is to believe women; I just wish I could believe the film.

From start to finish, lead to co-stars, director to writers, this is a film experience that reminds you that it doesn't matter how many stars are around, or how much is spent.

Structurally, this film requires a strong, central performance, and Stewart simply isn't good enough. There are moments when she is quite good, but often she is so understated that she is essentially dead -- I see nothing in her face or movements that betrays anything worth looking at. Dead people make bad film characters. Now, you could say that rape victims often report feeling numb, but playing numb requires more than Stewart is capable of providing (cf. Rose McGowan's rape scene in The Doom Generation). I did like that the film primarily portrayed high school as the command-and-control hell that it usually is.

This is not a bad little film. It's very slow moving - painfully so at times - but it's very well acted, particularly by Kristin Stewart in an earlier role. It deals with date rape, so is not exactly cheerful viewing, but it's an important topic and I liked how they handled it.

Who says Lifetime doesn't have good programming? Kristen Stewart does quite well as Melinda: the pre-trauma smiles and laughter; the post-trauma silence and distance. However, I can't help being overcritical of her. All her good performances are good in the same way, you know what I mean? Dead, unblinking eyes (except for that unfortunate period during which she blinked too much...), monotone voice, pretty girl with aura of mystery. She's certainly cast well, but I'm curious about her range.

CAST: Kristen Stewart, Hallee Hirsh, Erio Lively, Elizabeth Perkins, Michael Angarano, Allison Siko, Steve Zahn, D.B. Sweeney DIRECTED BY: Jessica Sharzer SUMMARY: An unfortunate incident has left Melinda (Kristen Stewart) shunned by her friends and completely traumatized. Now, she enters the ninth grade a selective mute, isolating herself from everyone at school until a sympathetic teacher (Steve Zahn) encourages her to express herself -- and, ultimately, heal herself -- through art. MY THOUGHTS: Saw this movie for a third time today and thought I would give it a review since is one of my favorite movies. Fan of Kristen Stewarts, and this movie is what started it. I saw her in this film and thought she did amazing at playing not only such a difficult role, but playing it perfectly. This movie touches on some sensitive issues that go on, but never gets reported. It's unfortunate and I was glad to see a movie touch base with the issue. Kristen was really good at bringing the inner torment and anguish from this character. Liked Steve Zahn as the art teacher. He, not knowing was the one who was really helping Melinda in healing and coming to terms with what happened to her. It's a really emotional film to watch and to know these things happen, and are most of the time over looked, is sad. This movie gives a message of hope. Hope that some will see this movie and help them in some way. But the star of this film was definitely Kristen Stewart. She really brought it with this character. She said a lot without saying anything. So more than anything, see this movie for Kristen's raw, honest, and beautiful performance alone.