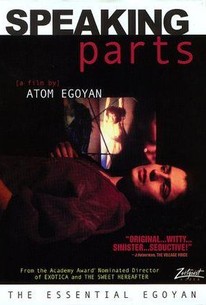 "In my films, you're always encouraged to remember that you're watching a collection of designed images." Thus spake Canadian filmmaker Atom Egoyan in describing his calculatedly non-realistic style. In keeping with his earlier works, Egoyan's Speaking Parts, though grounded in reality, could never be confused with the facts of life. Arsinee Khanjian plays a near-somnambulistic maid who carries a torch for aspiring actor Michael McManus. She obsesses on McManus by renting tapes of the films in which he's appeared as a non-speaking extra. As McManus ignores Khanjian while wooing would-be filmmaker Gabrielle Rose (he wants to star in a film based on Rose's life-saving organ donation), Khanjian develops a sort of rapport with video store manager Tony Nardi, who also harbors dreams of becoming a filmmaker. The most curious (and, to some, maddening) aspect of Speaking Parts is that all the characters physically resemble one another. What this has to do with Egoyan's "message"--if any--is unclear, but it sure works towards the director's goal of assuring that the viewers are constantly aware that they're watching a movie and not Real Life. ~ Hal Erickson, Rovi

David McKay
as Man at the Party

Cindy Fidler
as Women at the Party
View All

Egoyan's cinema has always been one of emotional displacement.

It spoke to me as being more smart than enjoyable.

Call it "not-bad" Egoyan. He's figured things out better in later films. Here he seems to be experimenting more than trying to create a masterpiece.

[font=Century Gothic]In "Speaking Parts", a shy woman, Lisa(Arsinee Khanjian), works as a maid at a hotel where she has a crush on a coworker, Lance(Michael McManus). He is also an actor who has worked as an extra in films(Lisa watches his movies on video. This brings her into the orbit of a video store manager, Eddy(Tony Nardi).) and sees an opportunity to move up to speaking parts when he slips his picture underneath the door of a casting director, Clara(Gabrielle Rose), staying at the hotel.[/font] [font=Century Gothic][/font] [font=Century Gothic]"Speaking Parts" is a good, intelligent movie about communication in the modern age. It is now possible to watch somebody without having any contact with them, but is that a good thing?[/font]