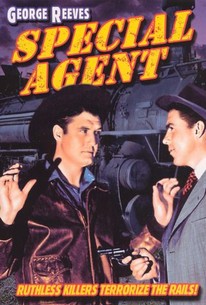 It had been said that the Pine-Thomas production unit never lost money for Paramount Pictures. Even without major star names to carry the box-office weight, Pine-Thomas' Special Agent managed to post a tidy profit. William Eythe stars as Johnny Douglas, an operative of the combined railroads' special-agent division. While encamped in a small California town, Douglas takes on the villainous Devereaux brothers (George Reeves and Paul Valentine), who pull off a big-time payroll train heist. Heroine Lucille Peters, whose father is killed in the robbery, is played by Laura Elliot, who later portrayed the bespectacled murder victim in Hitchcock's Strangers on a Train--and who, as Kasey Rogers, went on to appear as Mrs. Larry Tate on TV's Bewitched. Most of Special Agent is filmed on location, adding authenticity to the melodramatic goings-on.

Robert B. Williams
as Supt. Olmstead

Truman Bradley
as Narrator
View All

There are no critic reviews yet for Special Agent. Keep checking Rotten Tomatoes for updates!

There are no featured audience reviews yet. Click the link below to see what others say about Special Agent!