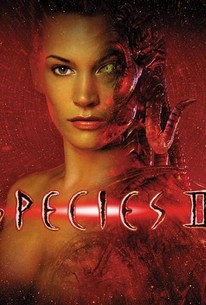 In the science-fiction thriller Species (1995), Natasha Hentsridge appeared as the beautiful but deadly Sil, a human-alien DNA combo. In this sequel, Hentsridge portrays Eve, a government experiment concocted to gain an understanding of how to combat future aliens, while Michael Madsen and Marg Helgenberger repeat their roles from the earlier film. When astronaut Patrick Ross (Justin Lazard) returns from the first manned Mars expedition, he's infected with the same DNA that spawned Sil and Eve. Hailed as a hero, Ross is pressed into politics by his father (James Cromwell), a senator. Any woman who beds the sexually active Ross is immediately impregnated, with embryos quickly developing and killing the mother. Ross hides the offspring on a family estate, as LA cops begin to detect a pattern in the female deaths. At the lab where scientists are monitoring Eve, Dr. Laura Baker (Helgenberger) realizes that Eve has a telepathic link with Ross, and that these two hybrids hope to couple. Press Lennox (Madsen) and Colonel Burgess (George Dzundza) figure Eve can be used to lead them to Ross. Cleared as a murder suspect, Mars mission astronaut Dennis Gamble (Mykelti Williamson), joins Lennox and Baker and gets in on the action as everyone involved closes in on Ross. Richard Belzer does a cameo as the President of the U.S., while Peter Boyle makes an uncredited appearance as a scientist.

Dustin Turner
as Kid at Supermarket

Donna Sacco
as Woman in Crowd

Sondra Williamson
as Woman with Gamble

Bill Boggs
as Himself

Richard Belzer
as US President

Peter Boyle
as uncredited
View All

Increased silliness combats the heightened grotesqueries, resulting in a stale sequel full of potential but failing badly in execution.

There's probably better acting from the pole huggers at the Cecil than the sorry-ass cast of Species II.

A clone of the first film except with a small twist...

'It's awful; it's just awful, gasps Marg Helgenberger in one scene of this absolutely abysmal follow-up ... viewers are likely to find their heads nodding in agreement.

A totally unnecessary sequel that will likely only please 12-year-old boys.

The sequel ups the "silly" ante without bringing any new brains to the table.

A stinky sequel with a huge DUH factor.

I loved the exploding alien birth. What a riot!

Species II is one sequel that screams...Yuck! It also conjures up...Why? Screenplay be damned. Acting? Throw it out the window.

You don't need to have seen the original "Species" to appreciate how utterly lousy "Species II" is.

What's better than alien conquest? Alien conquest through sex, through rape no less ("They came from millions of miles of space ta git muh boo-tay!"). It sounds like a bit much, and yet it's the basis of this sequel ("So good they come back fer seconds!"), which is little more than sexploitation for nerds. And there is a third, too, so this one made some money.

I watched this on cause Mykelti Williamson is in it, I haven't drrn the other Species filns, and I must say I enjoyed this one more then I thought I would. Pleanty of good action, one nasty look allien. I give it 4 stars, 5-29-13

Decent sequel to Species, Species II is pure popcorn Sci Fi horror that will most likely appeal to fans of the first, or any monster film fan looking for a good gore fest. Though not as fun as the firs, Species II proves to be a lot better than the third and fourth films in this series. This is an impressive sequel that though is far from perfect, has enough momentum to entertain the viewer. This film has enough gore elements to overshadow the paper thin plot, and works. The film is pure popcorn sci fi horror, and though not memorable by any means, this film, this film is nonetheless a worthy film to watch compared to the final two sequels that would follow this film. The acting here is decent at best, nothing ever great, or remarkable. The plot is so-so, and doesn't do anything to blow you away. However what this sequel does is deliver good gore content, and it does it very well. The film plays out like a mindless sci fi horror action film, and it doesn't possess anything truly remarkable about it. Overall this is a fun film that should appeal to fans of alien, monster films. If you can excuse the paper thin plot, you'll most likely enjoy the film. Fans of the first film will most likely enjoy this one as much as the first. Though lacking in content, the film delivers and in the end, that's what matters.

I thought this was an ok follow up to the first film. It keeps 3 of the original cast, including Natasha Henstridge. It's more violent, gory and raunchy than the first as this time round a male astronaut is infected with the alien DNA and has an urge to breed. Not as good as the first but far better than I thought it would be.