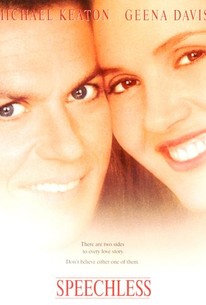 A mix of political satire and a modern take on 1930's-style screwball comedy, this romance from director Ron Underwood was assumed by many to be based on the real-life relationship between liberal political consultant James Carville and conservative commentator Mary Matalin. Michael Keaton stars as Kevin, an insomniac who meets Julia (Geena Davis) in a store late one night as they haggle over the last bottle of sleeping pills. After spending a romantic evening together, Kevin and Julia each discover to their chagrin that the other is a rival speechwriter in a nasty New Mexico senatorial campaign. As the senate race heats up, the bickering pair tries to keep the relationship alive, but then Julia's ex-fiance Baghdad Bob Freed (Christopher Reeve), a network news foreign correspondent, shows up with the intention of renewing their relationship.

Will Nye
as Security Guard

This script needed to be completely overhauled before filming began.

Never achieves the madcap hilarity of the '40s romantic comedies it seeks to emulate, and some of the dramatic moments feel a bit forced.

Mugging to an unfunny script, Keaton and Davis are no Tracy and Hepburn, and the funereal pace doesn't help.

It comes down to the charms of Keaton and Davis in the end. You like these characters and root for them to score.

Ron Underwood, the director of City Slickers, once again compromises appealing actors and an entertaining premise with a needless overlay of mush.

The movie's a campaign disaster from the get-go, and no amount of damage control (including MGM's extensive publicity) can hide it.

Utterly devoid of subtlety and grace, Speechless is a desperate, thrown-together hodgepodge that tries to glide by on the supposedly surefire chemistry of the pairing of Davis and Keaton.

The rivalry never sparks, the pace flags and it seems pointless to enter donkeys in a race designed for thoroughbreds.

Toothless as political satire and bland as romantic comedy.

This is intelligent romantic comedy of the kind we get all too seldom these days, and the plot is something Cary Grant and Katharine Hepburn would have loved in their prime.

Watchable. The story is pretty blah depite it's potential. It could have been something really clever but there was very little as far as romance.

Remember those romantic comedies of old where the plots for the most part were usually entirely dispensible because all that really mattered was the chemistry between the two leads? Well this one reaches for just that high aspiration ...

I caught Speechless early the other evening and found it to be a nice way to wind down from the rigors of the workday. Michael Keeton and Geena Davis had good chemistry together in this light, romantic comedy set in the midst of a political campaign. Kept me entertained for a while, though the ending was a bit too cheesy...

Cute movie with likable performances by the leads.