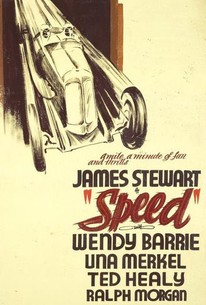 The fast-paced world of Indy car racing provides the backdrop for this drama. The story centers on a test driver who works at a major auto plant. He and his cohorts have invented a new kind of carburetor and are feverishly working to perfect and use it in the upcoming Indianapolis 500. As the race date draws near, the crew keeps having problems with their new invention. The owner's daughter suggests that her father let her friend, an engineer, examine the device. He proves to be a big help, but then tension begins developing on the team as both he and the inventor have developed romantic feelings for the daughter. On the day the carburetor is finally tested, something goes terribly wrong and the test driver and the inventor nearly die. Fortunately, the engineer saves them and they continue working on the troublesome invention. They perfect it on time, and by the end of the race they are all showered with praise. The inventor also gets his girl. ~ Sandra Brennan, Rovi

Jack Clifford
as Master of Ceremonies

The mere presence of James Stewart elevates the B film to passable.

There are no featured reviews for Speed at this time.