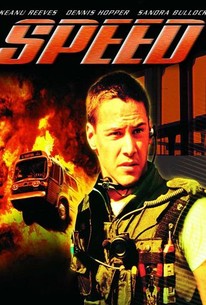 If you don't think Speed is the fastest-moving adventure film ever made, we challenge you to find a faster one. Keanu Reeves stars as an LA Bomb Squad specialist whose principal antagonist is elusive bomber-extortionist Dennis Hopper. Seeking vengeance after his latest ransom scheme is thwarted, Hopper presents a personal challenge to Reeves: A wired-for-destruction city bus, which will detonate if the speedometer drops below 50 MPH. Playing the reluctant civilian who is pressed into service as the bus' "substitute driver," leading lady Sandra Bullock became a major star in her own right. Once Speed gets to the meat of its story, the excitement never lets up--not even after the boobytrapped bus is out of the picture. ~ Hal Erickson, Rovi

Patrick Fischler
as Friend of Executive

Speed is both a reminder of the pleasures of well-done mindlessness and graceful evidence that Hollywood's newest generation of talent can play the box office game if and when it wants to.

There should be traffic jams at the box office as Fox picks up many busloads of riders for its fast and furiously entertaining thriller Speed.

De Bont has assembled it with masterly precision. And Speed looks terrific. There are breathtaking aerial shots, mind-boggling stunts, and camera positioning that you just don't expect. It's a rocketing eyeful.

A riotously enjoyable locomotive of action, Speed is driven by a premise of such crystalline purity that its ridiculousness becomes part of the fun.

Believe it or not, the most exciting movie of the year takes place mainly in an elevator, on a city bus and on a train car.

Action directing is a put-up-or-shut-up game, a skill that can't be faked or finessed; even a 10-year-old can tell if you've got it or not. And on the evidence of the invigorating Speed, Jan De Bont has definitely got it.

The action in Speed is unrelenting for the most part, moving from one explosion to another and keeping the viewers entertained throughout the almost two-hour running time.

Even with the few things that don't make sense or don't age well, the whole of the film remains as enthralling as ever.

Speed offers the simple pleasures of a great action film...

One of those rare, seemingly mindless actioners that manages to mix enjoyable performances, a slick story, and white-knuckle thrills into a highly influential feature.

Speed still remains a taut, thrilling action masterpiece, one that is expertly edited, fantastically written, and exhilarating from start to finish.

The chemistry between Bullock and Reeves is great ... More importantly, however, Speed knows and embraces its own silliness - without sacrificing the stakes.

Well I think 'Under Siege' kick started the term 'Die Hard on a...' back in 1992, then along came this massive action film rollercoaster success in 1994 which coined the highly imaginative term 'Die Hard on a bus'. Holy skidmarks! this film brought back some memories of my teens, I remember this film well and the huge furore it caused, all the girls were banging on about Reeves and all the boys were banging on about Bullock. The plot is actually quite ingenious really, it sounds insane, how on earth can you set an action film on a bus? we all asked backed in the day. Well obviously there are bits that aren't within the bus of course but the main threat of a bus that can't go below 50mph is a clever plot trick. That's pretty much it really, a bus load of stereotypical everyday commuters are all trapped on a bus which has a bomb underneath. Super cop Keanu Reeves takes on the job of saving the day from the terrorist Dennis Hopper. And at the end of the ride just like Hans Gruber, all the bad guy wants is some money. Looking back at this its so so damn cheesy I can't believe it, how did we all think this was cool?! The opening credits are some of the worse looking computer effects/text images I've seen, obviously early days back then and boy does it show when 'SPEED' pops up. I mean lets think about this for one moment, how can anyone take an action flick seriously when one of the SWAT guys is played by...Jeff Daniels??! The main action on the bus which takes up most of the film is undeniably enjoyable still. The whole idea is such a rush and easily translated to film, sure half the time the bus is clearly not going at 50mph (usually much slower) but it still comes across very well. You get every predictable scene you would naturally expect, the film isn't the most original in terms of characters. All the passengers fight amongst themselves, one is a gang member with a gun who of course shoots the bus driver which mean Bullock must drive. One lady is always panicky and slightly hysterical, one guy is mouthy, one guy delivers some comedic lines every now and then, there's a token black couple, a token Latino guy and Reeves of course totally stony faced and stoic at all times. For the most part the film is quite realistic, but there are some moments which they could of left out. The bus jumping a big gap in an unfinished highway springs to mind which is easily the worse idea ever. The way they let the bomb loaded bus careen into an oncoming airliner once everybody is safely off, surely they should of tried to veer it somewhere so it wouldn't cause massive damage? Of course we all know the reason is merely to show off a nice big explosion at the end, despite the fact in the films plot it may have caused more deaths. What about the guy pulling the plane in his little tug truck??...who cares its a cool explosion! While we all know that Reeves is the invincible turbo charged heroic cop who never gets tired or injured, he is acceptable for what he is. Bullock on the other hand is not, at no time did I ever accept the fact she could be driving this bus, there's just no way. Bullock is an annoying wet drip of a woman and shows it completely in this film, she flaps, squeals and rarely looks in control. They wouldn't have lasted five minutes in reality with her driving. On the other hand Hopper is clearly having a blast as this pissed off ex-cop out for revenge. He's dodging around scowling and howling like no ones business, he goes for broke and totally delivers a perfect hammy over the top bad guy. This film really is amusing at times though, like in the finale when Reeves and Hopper are fighting. This young, tough, adrenaline filled ultra cop getting his ass beaten by clearly a late middle aged man who is half his size and can barely run. The film does tend to lose its edge once the main event of the bomb rigged bus has been solved. The set pieces get more and more ridiculous until we reach the rather overly ridiculous finale with the underground train, which is clearly a model. The film in parts is plain stupid, comic relief from various characters along the way is reasonable I suppose but it all adds to the cheese n ham factor, kinda takes the edge off at times. But overall the film doesn't try to be anything other than a speeding bullet of an action flick that you don't really have to look too deep into. And not often does an action films title sum up the general content so perfectly. Still nowhere near on par with the classic 'Die Hard' but a decent rare original action film.

If you suspend logic a little bit and don't question the bad guy's non-existent motives for his actions, then Speed is one of the best action movies out there. Keanu and Sandra are great.

WOW, THIS MOVIE HOLDS UP. Over the top, yet kind of wholly logical.

[img]http://images.rottentomatoes.com/images/user/icons/icon14.gif[/img] Speed is one of those action movies that has a familiar premise that were sure we've seen somewhere else before. But we can't quite put our fingers on where. Even if originality is not it's strongest point it's fast paced, relentless, action packed and emotionally involving. But on the down side it's a bit tiring and heavily reliant on the cliches. Without doubt it doesn't in any way re-invent the bomb/hostage style thrillers but even though it isn't in a fine work of art it's continuously filled with nail biting suspense and easily one of the better action B movies of it's time. Despite the fact it's longer than it needs to be and dumb without charm, it's definitely worth seeing once and most remarkably believable considering the various flaws in the plot. It features great hero and bad guy chemistry from Keanu Reeves and Dennis Hopper, and a sassy, lovable one from "pre oscar" Sandra Bullock. Also the special effects sequences are well choreographed, the camerawork is perfect, and the pain the characters feel isn't weightless. So technically it's pretty well structured, and even though it's entirely empty and very thinly plotted it gets the job done. So if you want to see an above average blockbuster with Keanu Reevers (something that strangely doesn't come around often), you will finish it satisfied. Personally I was constantly at the edge of my seat the whole way through, and overall I think it deserves it's title as one of the most respected action films released in the 90's. Most impressively the brilliantly nostalgic and welcoming tone of it to it really reminded me of the time when mainstream action audiences weren't being served criminally bad explosion fests like Transformers: Dark Of The Moon every weekend. And because of that, Speed remains an extremely fast and over the top slice of ridiculously fun escapism that deliriously grips you, and really doesn't let go until it ultimately comes to a stop.