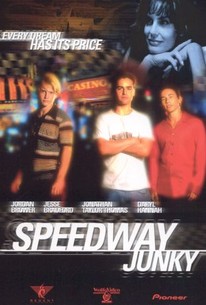 In this gritty drama executive-produced by Gus Van Sant, a teenaged would-be stock-car driver gets more than he bargained for when he makes a pit stop in Las Vegas to earn a little cash. Almost as soon as he arrives in the city, high-school dropout Johnny (Jesse Bradford) finds himself victimized at the slot machines by a slick little vixen. His journey to glory on the racetrack thus sidetracked, he soon falls in with a group of hoods and street urchins. Befriended by solicitous hustler Steven (Jordan Brower) and condescended to by gay-for-pay stud Eric (Jonathan Taylor Thomas), Johnny gets a quick introduction to the sleazy Vegas landscape. At first he rejects his new acquaintances, but after a disastrous liaison with a buxom young lady (Tiffani-Amber Thiessen), he finds himself the reluctant new best friend of the besotted Steven. Adamantly professing his own heterosexuality, Johnny tries to find female clients to bankroll his ticket out of town. But soon Eric arrives, promising big bucks from his wealthy male patrons, setting the stage for conflict with Steven and unexpected bloodshed. Shown during the Panorama program at the 1999 International Berlin Film Festival, Speedway Junky was the debut feature from writer/director Nickolas Perry. Daryl Hannah co-stars as an older ex-prostitute who serves as a sort of foster mother for both Johnny and Steven. The film also marked the acting debut of musical artist Warren G and features a cameo appearance from Patsy Kensit.

It's exploitation at its most listless and uninspired.

Hard to watch -- not because of its unflinching realism, but rather for its mawkish reliance on every boy hooker flick from Midnight Cowboy to Johns.

A potent mixture of sentiment and grit, and it showcases the talents of its young principals.

It's My Own Private Idaho! Well, minus the story, the style and the smart script.

The film belongs to Jordan Brower, whose every appearance breaks one's heart, and makes some otherwise familiar material come alive.

There are no featured audience reviews yet. Click the link below to see what others say about Speedway Junky!