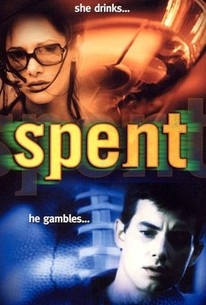 Twenty-something L.A. hipsters make some earnest and not-so-earnest attempts at growing up in this ensemble comedy-drama from writer/director Gil Cates Jr., which premiered at the 2000 South-by-Southwest Film Festival in Austin, TX. The film's central dysfunctional relationship concerns Max (Jason London), a writer who agrees to give up his gambling habit for his significant other Brigette (Charlie Spradling) -- but only if she promises to give up her drinking habit. Meanwhile, Max's buddy Doug attempts to hound none other than Jack Nicholson (who does not appear in the film) in hopes that the perma-smirk star will produce his script. To this end, he employs the comely Brigette to woo the superstar at a Lakers game. On the home front, Max's roomie Grant (James Parks) is struggling with the issue of his closeted sexuality -- and more specifically, with the massive crush he harbors for his strapping rent-sharer. Spent is the first feature from Cates, whose father is veteran TV producer/director Gilbert Cates; his cousin is actress Phoebe Cates.

There are no critic reviews yet for Spent. Keep checking Rotten Tomatoes for updates!

There are no featured audience reviews yet. Click the link below to see what others say about Spent!