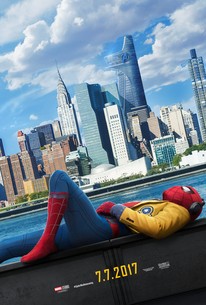 Critics Consensus: Spider-Man: Homecoming does whatever a second reboot can, delivering a colorful, fun adventure that fits snugly in the sprawling MCU without getting bogged down in franchise-building.

Critics Consensus: Spider-Man: Homecoming does whatever a second reboot can, delivering a colorful, fun adventure that fits snugly in the sprawling MCU without getting bogged down in franchise-building.

Critic Consensus: Spider-Man: Homecoming does whatever a second reboot can, delivering a colorful, fun adventure that fits snugly in the sprawling MCU without getting bogged down in franchise-building.

A young Peter Parker/Spider-Man (Tom Holland), who made his sensational debut in Captain America: Civil War, begins to navigate his newfound identity as the web-slinging super hero in Spider-Man: Homecoming. Thrilled by his experience with the Avengers, Peter returns home, where he lives with his Aunt May (Marisa Tomei), under the watchful eye of his new mentor Tony Stark (Robert Downey, Jr.). Peter tries to fall back into his normal daily routine--distracted by thoughts of proving himself to be more than just your friendly neighborhood Spider-Man--but when the Vulture (Michael Keaton) emerges as a new villain, everything that Peter holds most important will be threatened.

Marisa Tomei
as May Parker

Kerry Condon
as Voice of Friday

Everything We Know About Spider-Man: No Way Home
Your Epic Movie Franchise Binge Guide: The Best Way to Watch the Biggest Series
Who Is the Best Spider-Man?

What makes this homecoming fun is [Tom] Holland, who seems as excited about Spider-Man as his classmates even though he is Spider-Man.

If "Spider-Man: Homecoming" is to be judged solely on its ability to unite a diverse audience behind a fun motion picture, it seems to have succeeded wildly.

A strangely oblivious film, one that undercuts its story with exactly the sort of praise-hungriness that its hero learns to overcome.

This is a charming, funny, coming-of-age story about a 15-year-old, Peter Parker, who has more power than he can handle and at the same time is frustrated that he can't show it off.

Spider-Man: Homecoming is a sublime coming out party for the teenage wall-crawler.

The youthful vibe of this character reset, with its sense of humor and its light touch, makes Spider-Man: Homecoming one of the most enjoyable Marvel movies in years.

Spider-Man: Homecoming isn't bad. It's safe, unsurprising, and a little choppy at times but never bad.

The movies in the Marvel Cinematic Universe have been getting darker of late but with Spider-Man: Homecoming we get a true comic-book movie with lots of action, light-hearted fun, and character growth.

In most respects, Spider-Man: Homecoming swings and scores.

This film gets everything right about Peter Parker.

It makes such a difference when a villain is given more than the standard arbitrary screen time. Whilst not perfect and Keaton could have benefited from more screen time, but he makes every scene count.

We didn't need another Spider-man origin story, and thank goodness this isn't one. Tom Holland's "Aw shucks, I get to hang with the Avengers" schtick started to get old in Civil War, and gets played out quickly in this film, but there is so much more to like here. The villain isn't a nihilistic madman who simply wants to destroy the world (he actually has a decent motive), Peter Parker's problems are both large-scale and grounded, and most of the characters are likable. Marvel hit a lull for a while, but now seems to be back on the uptick.

There is, of course, the question of "why" that comes along with this film. Haven't we already been here? Twice? The answer is "no, we haven't". With mucho respect for Spidey creator Steve Ditko, this is the one that remembers the primary rationale for Spidey love: he's a kid. He doesn't know everything. He's only just figuring things out for himself. He's the anti-Superman. So loosen up. And the film does, exuberantly. As well it diversifies the proceedings, updates the action to modern times. Sets the stage for what may follow w/o a great deal of emphasis that diverts from what you're watching. It's just a fun movie. Holland outshines his predecessors and grounding everything is Michael Keaton, whose villain doesn't want to take over the world, only wants his piece of it. A superb job by all.

With a refreshing adolescent vibe and great performances by Tom Holland and Michael Keaton (who plays a surprisingly nuanced villain who has understandable motivations), this is a very entertaining superhero movie that is also smart to skip the character's over-told origins.