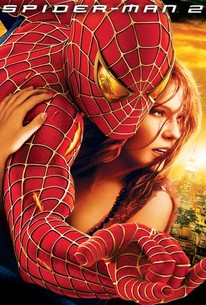 Critics Consensus: Boasting an entertaining villain and deeper emotional focus, this is a nimble sequel that improves upon the original.

Critics Consensus: Boasting an entertaining villain and deeper emotional focus, this is a nimble sequel that improves upon the original.

Critic Consensus: Boasting an entertaining villain and deeper emotional focus, this is a nimble sequel that improves upon the original.

Stan Lee's all-too-human superhero returns to the screen in this highly anticipated sequel to 2002's blockbuster hit Spider-Man. Peter Parker (Tobey Maguire) is attempting to juggle college classes and his job as a photographer with the Daily Bugle while maintaining his secret life as costumed crime-fighter Spider-Man. Parker is also struggling to hold on to his relationship with Mary Jane Watson (Kirsten Dunst), who is beginning to enjoy success as a model and actress, and both Mary Jane and Peter have noticed he's beginning to buckle under the strain. Parker's friendship with Harry Osborn (James Franco) is also beginning to fray due to Peter's seeming alliance with Spider-Man, whom Harry blames for the death of his father, the nefarious Norman Osborn. As Parker weighs his responsibilities to himself and those around him against the obligations that come with his special powers, Spider-Man is faced with a new nemesis -- Dr. Otto Octavius (Alfred Molina), a deranged scientist whose latest project has turned him into the near-invincible cyborg Doctor Octopus. Spider-Man 2 was directed by Sam Raimi, who helmed the first film, and much of the original cast has also reunited for this sequel, including Rosemary Harris, J.K. Simmons, and Bruce Campbell. ~ Mark Deming, Rovi

Rosemary Harris
as Aunt May

Hal Sparks
as Man in Elevator

Scott Spiegel
as Man on Balcony

Lou Volpe
as Man at Web

Joy Bryant
as Woman at Web

Anne Betancourt
as Woman at Fire

Everything We Know About Spider-Man: No Way Home
Who Is the Best Spider-Man?
Character Face-Off: The Best Version of 15 Mega Popular Movie and TV Characters

Maybe it has something to do with Sam Raimi's skills as a director, or with Tobey Maguire's very human central performance, but the Spider-Man films are by far the best of the superhero genre.

A sequel that not only outstrips its predecessor but has a perversity and quick-wittedness that hardly seem to belong in a comic-book movie.

Spider-Man 2 is better than just dark, it's touched by authentic teenage paranoia and neurosis.

This is a better picture than the first because it makes its characters human, doesn't camp it up and refuses to believe that Kerpow! Kerching! is more than a constituent part of the proceedings.

Alfred Molina makes a more baroque supervillain than Willem Dafoe's Green Goblin, but the other stars seem happy to be giving us more of the same. Sam Raimi's direction, on the other hand, is even more fluent and well paced.

The web-slinging sequences are bigger-better-brighter-faster than the already spectacular ones in 2002's Spider-Man, and at the same time, the film's smaller emotional moments are denser, richer and more resonant than those in the first.

Still one of the best superhero films of all-time.

Despite a total of four writers and filming beginning before an official script was completed, Spidey 2 contains more coherent drama, action and character development than a dozen of the usual Hollywood blockbusters.

A cartoonish "coming-of-age" story, tepid liberalism, limp satire. Given the current state of things, this is dangerously weak material.

It does delude the possibility of a different Marvel, less limited and more permeable to authorship and the unpredictable forces of the fantastic. [Full Review in Spanish]

Not compelled to spend time sketching in the origin of Spider-Man, Raimi can flesh out his villain of the piece, Dr Octopus, and it's a lovely performance by Alfred Molina.

Spider-Man 2 is that extremely rare gem that manages to exceed the high qualities of its predecessor in everyway.Tobey Maguire reprises his role and maintains to present the perfect portrayal of Peter Parker. While struggling with real life and his heroic life, Parker's growing love for Mary Jane grows and flawlessly creates a strong emotional trend to this film. Alfred Molina gives audiences one of the strongest performances with a Marvel villain through his role as the notorious Doctor Octopus. From a potent script and incredible visual effects (more practical then CGI), Sam Raimi succeeds in creating an intimidating foe who is both interesting and sophisticated. Without a doubt one of the very best Marvel films to come out is cemented as my most favoured superhero film of all time.

Peter Parker begins to find the life of a super hero a rather thankless task and increasingly stressed by his inability to balance work, school and fighting crime he decides to quit being Spiderman. Unfortunately he does not count on a disastrous scientific experiment that turns an altruistic genius into a mechanically enhanced megalomaniac! Spiderman builds on a fine original and delivers all it promised and more. The action sequences are brilliantly done and even more importantly, it intelligently fleshes out the characters with humour and depth. The way Peter has to confront the pros and cons of superhero-dom is really cleverly done and it injects even more clever humour; in particular the scenes when Peter accidentally dyes his smalls with his spider suit and taking a lift when his powers fail him. It's witty, funny and exciting and everything a superhero film should be. And once more I felt sorry for anyone having to share a scene with the brilliant J. K. Simmons! One of the best hero movies out there.

Taking a huge leap forward in technology and storytelling, "Spider-Man 2" is not just your average superhero film, but it is a piece of super-heroic art to own for a lifetime that should be cherished upon, and never given up! There is still cheese in this film, just like the first time around, but the characters have so much depth and the consequences actually come into effect. I do not see why anyone in their right mind would not like this film, because to me, it is "THE" greatest superhero film of all time! The shots are very impressive, the acting is very solid, the writing is on another level of great when it comes down to the considerations that it is a superhero film, and the action scenes are not something you can just walk away from. "Spider-man 2" is a movie that I will love forever! From the humour to the sad emotional moments, this film is brilliant in it's own way! It may not follow the comics to a "T," but honestly, we knew that going in. Forget that, and you have a masterpiece of a superhero film!