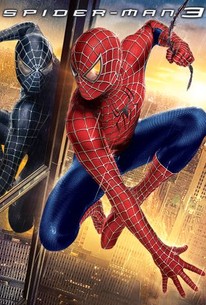 Critics Consensus: Though there are more characters and plotlines, and the action sequences still dazzle, Spider-Man 3 nonetheless isn't quite as refined as the first two.

Critics Consensus: Though there are more characters and plotlines, and the action sequences still dazzle, Spider-Man 3 nonetheless isn't quite as refined as the first two.

Critic Consensus: Though there are more characters and plotlines, and the action sequences still dazzle, Spider-Man 3 nonetheless isn't quite as refined as the first two.

Your friendly neighborhood web-slinger is back, only this time his sunny outlook has become partially overcast in the third chapter of director Sam Raimi's Spider-Man saga. Tobey Maguire, Kirsten Dunst, and James Franco return to reprise their roles from the previous two installments, with Thomas Haden Church, Topher Grace, and Bryce Dallas Howard making their first appearances in the series as Flint Marko (aka Sandman), Eddie Brock (aka Venom), and Gwen Stacy, respectively. Peter Parker (Maguire) has finally leaned to walk the middle ground between being the superhero that his city needs and the man that Mary Jane (Dunst) loves. All is well in New York City until one night, as Peter and M.J. sit gazing at the stars, a falling comet streams across the sky and crashes into the ground close by. But this isn't any ordinary shooting star, and upon impact the mysterious space rock is split open to reveal a shape-shifting symbiote with the power to overtake anything that it comes into contact with. Later, as Harry Osborn (James Franco) acquires his late father's flying board, engineers a powerful new Goblin outfit, and takes to the sky to avenge dad's death, the mysterious space sludge infects both Peter's Spider-Man suit and ambitious street photographer Eddie Brock (Grace). Peter's strange new suit gives him a newfound sense of power as it gradually overpowers his personality, and he discovers that escaped convict Flint Marko was in fact the man responsible for the death of Uncle Ben (Cliff Robertson). Unfortunately for Peter, Marko has recently acquired the power to morph at will and quickly completes his transformation into the dreaded Sandman. As the Sandman gives in to his darkest criminal instincts and the slithering space symbiote transforms Eddie Brock into the nightmarish fanged villain known as Venom, the citizens of New York City must once again call on Spider-Man to fend off destructive forces that are far too powerful for the likes of mortal man. ~ Jason Buchanan, Rovi

Rosemary Harris
as Aunt May Parker

Emma Raimi
as Girl With Camera

Lorne Raimi
as Boy at the Final Battle No. 1

Henry Raimi
as Boy at the Final Battle No. 2

Samantha Ressler
as Girl At The Final Battle

Michael McLaughlin
as Boy at Key to the City Ceremony

Keith Woulard
as Policeman at Sand Truck No. 2

Jim Coope
as Newsstand Patron No. 1

Dean Edwards
as Newsstand Patron No. 2

Margaret Laney
as Newsstand Patron No. 3

Emilio Rivera
as Policeman at Sand Truck No. 1

Kathryn Bryding
as Woman Outside Theater

Spider-Man 3 is the longest film in the series so far, and perhaps it tries to pack in rather too much. But it's intelligently directed by Sam Raimi and, with all those eye-popping set pieces, it's certainly never boring.

The breeziness that was so refreshing in the other episodes has been largely replaced by the kind of misery and moping that we can get from any old superhero.

At 141 minutes, this supe-opera is seriously overextended, with four distinct subplots and way too much hand-wringing over things like the heroine's singing career.

Notwithstanding a cute scene in which Peter enlists suave maitre d' Bruce Campbell to help him propose to Mary Jane, director Sam Raimi's juggling of the comedy and the action is unusually flat-footed.

A hollow shell of a saga devoid of both thrilling action and rousing passion.

What could have been if the studio didn't stick its inky black nose in Raimi's business...

Raimi, perhaps pressured by the fan base or studio executives, has tried to cram too much into this third - and presumably last - chapter of this hugely popular property.

Runs about 20-30 minutes too long and, at times, falls victim to its visual and action excesses.

...remarkable achievements toward an unremarkable end...

Spider-Man 3 is almost an embarrassment of riches, with villains and subplots almost sufficient to fuel a fourth installment.

Despite its shortcomings, Spider-Man 3 still manages to do enough to get by, even if it's apparent the franchise is starting to feel rusty and in need of a serious overhaul.

as i said with gremlins 2 the new batch definitely one of the best movie sequels. The plot is great, how the alien symbiote takes over peters mind and that it corrupts him. The other thing i love about the movie is Venom, Him being one of my favorite villains he was a perfect villain for this movie. though he was added at the last minute it doesn't show at all. Sam Ramie was at the top of his game when he did this movie. I also enjoy the revenge story about peter trying to kill sandman for killing his uncle, and Harry Osborne trying to kill peter for killing his father. And the ending is one of those few movies to make me cry. When The sandman says he didn't mean to kill his uncle and just how he says "And then i saw my partner running over with the cash, and the gun was in my hand" and when that tear rolls down uncle bens face it makes me burst with tears. And the action scenes in the movie were right on and amazing to watch the fight with harry at the beginning and when hes at his mansion, the fight with sandman, and the sand collosus and venom versus peter and harry. Theres a rule i go by with movies the more villains there are in a film the better it is to me star wars revenge of the sith, gremlins and gremlins 2, spiderman 3, shrek 4, pokemon 2000, x-men origins wolverine, x-men last stand, shrek 2, cats don't dance, quest for camelot, transformers you get my point. Villains are always the best characters in films Megatron, ruber, general grievous, venom, brain gremlin, and deadpool, darth sidious, skeleton king, darth vader, count dooku, jabba the hutt, there are many more in my opinion but i can't name all.

Harry loses his memory after attacking Peter and their friendship is seemingly restored leaving him free to hunt down the man truly responsible for Uncle Ben's death. However things are complicated by his transformation into The Sandman and the appearance of an alien creature that enhances Peter's negative emotions. There's actually a pretty decent sequel hidden inside the bloated, episodic mess that is Spider-man 3. Sam Raimi's presence at the helm is marred by his inability to resist the keys to the SFX toy shop but the cast are still likable, the comic relief (and JK Simmons in particular) is still funny and there's plenty of pacey action to maintain the attention. The big problem is with the script which relies far too much on contrivance and totally implausible coincidence. The most frustrating thing is that it could so easily have been corrected by the complete removal of the utterly ham-fisted and largely irrelevant Venom sub-plot. All the weakest elements of the film are tied up in it from Topher Grace's terrible performance, to the impossible to believe coincidences, to the frankly embarrassing jazz dancing emo Parker sequence. It's a shame because this wrecks the second half of the film and just detracts from some pretty decent character moments from Peter, Harry and even The Sandman himself. Yet another abject lesson that in film making, more often can mean less.

"Spider-Man 3," i'm not going to lie, has tons of plot holes; However, I find this film extremely entertaining! Ever since I first laid eyes on this film in theatres I was hooked on all the cheesy CGI that they chose to throw in. I could watch this film over and over again, laughing at the random cast choices and acting, but my belief still stands that if it is excluded from the first two films, then it would be a great film! Without it's corniness and it's unbearably cheesy scenes of CGI, it is comparable to the first film. It strays away from the comic books, which we all know that Raimi has already done since the beginning, but this time he went a little overboard when thinking about plot lines. He places far too many and much too many villains. Overall, I must say that it is the most entertaining film of the trilogy, to just kick back and watch some action, but without the heart of the first two, it unravels. "Spider-Man 3" works very hard to hold it's audience, and it does succeed, but only to fans of the first two. It will not gain any new fans. This film could have the title of "awesome," but there is too much wrong with it. "Spider-Man 3," despite what the critics have to say, it a very fun ride!